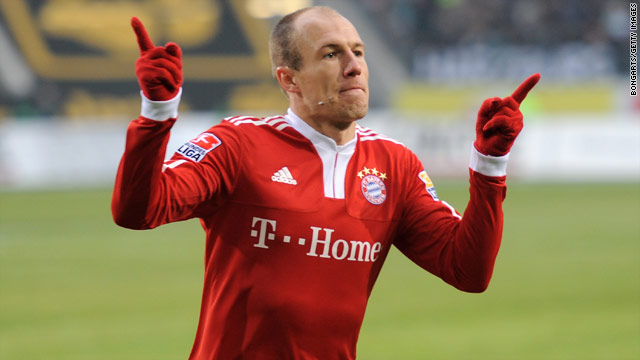 (CNN) -- Bayern Munich moved level on points with Bayer Leverkusen on Saturday, beating Wolfsburg 3-1 while the German Bundesliga leaders were held 1-1 at Bochum.

The two teams are three points clear of third-placed Schalke, who were held to a frustrating 0-0 draw at Freiburg.

Bayern were 3-0 up after an hour against ailing champions Wolfsburg as Dutch forward Arjen Robben scored in the second minute from Thomas Muller's left-wing cross and defender Daniel van Buyten headed his sixth goal this season from Ivica's Olic pass on 26.

Robben hit the post after the break and then second-half substitute Franck Ribery was credited with the third goal in the 57th minute, though it seemed possible that Wolfsburg's Andrea Barzagli had the final touch.

Wolfsburg striker Grafite had a penalty saved by Hans-Jorg Butt, his first miss since moving to the Bundesliga in 2007, after Ribery fouled Sascha Riether but the Brazilian added a late consolation from Edin Dzeko's deflected cross.

The result gave Bayern 45 points from 21 matches after a seventh successive victory, while Wolfsburg are now 20 points off the pace and just six above the relegation zone.

Leverkusen remained undefeated in the league this season but saw their four-match winning run come to a halt as Zlatko Dedic scored a second-half equalizer for 14th-placed Bochum.

Eren Derdiyok put the visitors ahead on the stroke of halftime with a low shot on the turn after a pass from Stefan Kiessling, but Dedic leveled in the 68th minute when he poked the ball past oncoming goalkeeper Rene Adler and in off the post.

Schalke failed to take advantage of Leverkusen's lapse despite extending their unbeaten run to seven matches, as Marcelo Bordon controversially had a goal disallowed soon after halftime when his header hit the underside of the crossbar and appeared to cross the line.

Teammate Kevin Kuranyi also headed against the post in the first half, while Mohamadou Idrissou nodded against the bar for Freiburg, who ended a four-game losing run to move up to 15th.

Fourth-placed Hamburg remained nine points behind the leaders after also dropping two points in a 3-3 draw at Cologne.

Hamburg led 3-1 with 15 minutes left after an early goal from Marcell Jansen and two from Croatia striker Mladen Petric, but Milivoje Novakovic pulled one back with a fine free-kick on 75 minutes and Adil Chihi equalized two minutes from time with a shot that deflected in off defender David Rozehnal.

Stuttgart continued their climb up the table with a 2-1 win at second-bottom Nuremburg that lifted them to eighth thanks to Roberto Hilbert's 87th-minute winner.

Seventh-placed Hoffenheim also have 28 points following a 2-1 win at home to bottom club Hannover, ending a four-game losing streak as first-half goals from Carlos Eduardo and Sejad Salihovic were the club's first of 2010.

Hannover pulled one back through Arouna Kone in the 67th minute but remain rooted to the foot of the table, five points below Nuremburg.

In Italy, Juventus continued their miserable run with a 1-1 draw at lowly Livorno, the second in a row for new head coach Alberto Zaccheroni.

Livorno, who moved up to 15th place and also held AC Milan 1-1 last weekend, took the lead in the 26th minute with a header from diminutive striker Antonio Filippini before Juve defender Nicola Legrottaglie nodded in off the post to level four minutes before halftime.

Juve then had Brazil midfielder Felipe Melo sent off for a second booking with eight minutes left.

Palermo moved up to fifth place, two points above Juve, with a 2-1 victory at home to Parma.

Edison Cavani headed in Fabrizio Miccoli's free-kick to put Palermo ahead after 63 minutes, but Jonathan Biabiany leveled nine minutes later with a controversial goal which came while the hosts called for treatment for their scorer.

Former Palermo coach Francesco Guidolin, who has had four stints at the Stadio Renzo Barbera, was denied a point on his first return with an opposing team as Brazilian Fabio Simplicio smashed an 87th-minute winner.