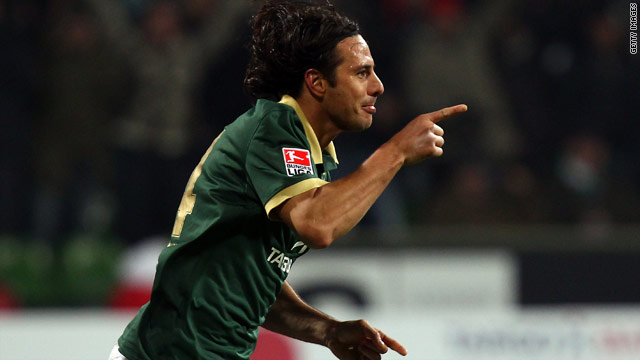 (CNN) -- Werder Bremen have ended their five-match losing streak with a 2-1 home win over the Bundesliga's bottom club Hertha Berlin, who remain seven points from safety, on Friday evening.

Marko Marin and Claudio Pizarro were on target for the home side, with Greece international Theofanis Gekas briefly giving the visitors hope with an equalizer.

Pizarro had hit the post with a 20th minute header with Werder's best first-half chance, before Marin broke the deadlock midway through the second half.

Mesut Ozil's attempted shot was charged down by defender Lukasz Piszczek, but the ball sat up nicely for 20-year-old Marin, who despatched a sweet volley past goalkeeper Jaroslav Drobny.

The lead proved short-lived as Gekas pounced from close range after Pizarro and goalkeeper Tim Wiese failed to clear a free-kick into the box.

But Peruvian Pizarro made up for his error when he brought Torsten Frings' free-kick under control and drilled a low left-foot shot past Drobny with nine minutes remaining for his eighth goal in 11 starts.