NFL fines Brett Favre $50,000 for not cooperating with inquiry 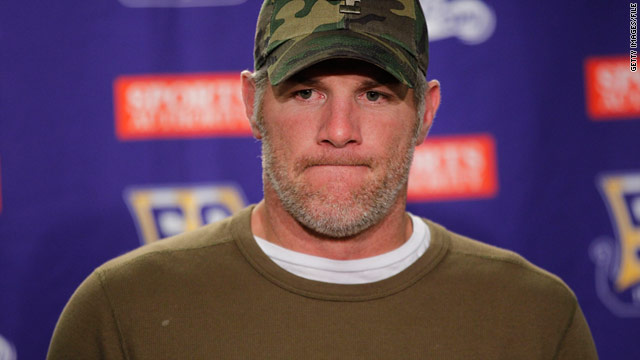 (CNN) -- Minnesota Vikings quarterback Brett Favre was fined $50,000 Wednesday by the National Football League for failing to cooperate with an internal investigation into whether he sent sexually explicit texts to a New York Jets hostess.

But NFL Commissioner Roger Goodell, citing a lack of evidence, "could not conclude that Favre violated league policies relating to workplace conduct," the league said in a statement.

The NFL was unable to establish whether Favre sent objectionable messages to New York Jets game-day hostess Jenn Sterger in 2008, when he played quarterback for the Jets. He joined the Vikings in 2009.

The league also found no evidence to contradict assertions by Favre and Sterger that they never even met in person.

But Goodell determined that "Favre was not candid in several respects during the investigation, resulting in a longer review and additional negative public attention for Favre, Sterger, and the NFL," the league said.

The NFL had expanded its investigation to look into a second media report alleging further misconduct by Favre with other women who worked at the Jets' facility during the 2008 season.

"Misconduct by Favre regarding that claim was unable to be substantiated because individuals with potentially relevant information declined to be interviewed or otherwise cooperate with the investigation," the league said.

Goodell has told Favre that if the investigation found a violation of the league's workplace conduct policies, the commissioner would have imposed a "substantially" bigger penalty.

In the allegations involving Sterger, the NFL reviewed public reports, its interviews with several individuals including Sterger and Favre, communications between the two and an independent forensic analysis of electronically-stored material.

"The investigation was limited in several respects because the conduct occurred in 2008 but was not brought to our attention until this fall. As a result, certain records and individuals were unavailable to the NFL," the NFL said in a statement.

The overall investigation took longer than expected because the league had trouble arranging interviews with key individuals and a lot of time was needed to gather stored electronic records, the league said. Goodell also decided to meet personally with Favre and Sterger, which added more time to the inquiry, the league said. There was no evidence to suggest that Sterger engaged in any inappropriate conduct, according to the statement.

Goodell used the occasion Wednesday to remind all NFL teams about improper or unlawful conduct in the workplace.

"Every member of every club's staff should be able to work in an environment free of harassment or hostility, and one in which every employee is valued, respected, and given a full opportunity to contribute to the goals of the club and the NFL," Goodell said in the league statement. "Our new training program on workplace conduct will help all of us to promote the right kind of environment for all employees and I intend to dedicate the fine I have imposed on Favre to help fund that training program."