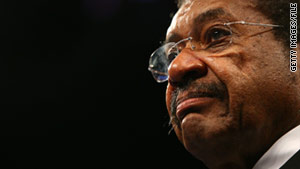 Security officials found ammunition in the luggage of boxing promoter Don King as he headed out of Cleveland.
STORY HIGHLIGHTS

(CNN) -- Security officials found ammunition in the carry-on luggage of boxing promoter Don King as he headed out of Cleveland after attending his wife's funeral, an airport spokeswoman said Monday.

"He was stopped at a security checkpoint and ammunition was found in his carry-on luggage," she said.

The ammunition was confiscated and King was allowed to continue to his flight, Mayo said. No charges were filed.

The Transportation Security Administration also confirmed the incident, without identifying the passenger.

King was in Cleveland for the funeral of his wife, Henrietta King, who died of stomach cancer at age 87 on Thursday.

Known for his flamboyant style and showmanship, King has promoted some of the greatest fighters in modern boxing history, including Muhammad Ali, George Foreman, Joe Frazier and Mike Tyson.