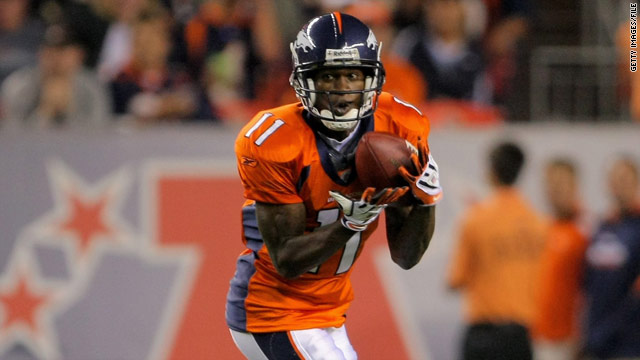 Kenny McKinley played in eight games with the Broncos as a rookie, but he was placed on injured reserve this season.
STORY HIGHLIGHTS

Authorities said it appeared McKinley died from a self-inflicted gunshot wound. He was 23.

"Deputies discovered a male in the second-floor master bedroom of the home and determined that male was deceased," the Arapahoe County sheriff's department said in a statement. "Although the death of Mr. McKinley appears to be the result of a self-inflicted gunshot, the investigation into this matter ... is ongoing."

McKinley was selected by the Broncos in the fifth round (141st overall) of the 2009 NFL draft from the University of South Carolina, where he set the school records for receptions. He attended South Cobb High School in Austell, Georgia.

Video: 'Love for the game, love for people'

He played in eight games with the Broncos as a rookie, but was placed on injured reserve before the start of the 2010 season after suffering a knee injury, according to the team.

"Everyone with the Broncos is shocked and saddened by the loss of Kenny McKinley," Broncos President and CEO Pat Bowlen said in a statement on the Broncos' website. "He was part of the Broncos family and will be greatly missed by our organization. My most heartfelt condolences go out to Kenny's family and friends."

Read more about pro athletes and depression on SI.com

McKinley is at least the third Bronco to have died since 2007. Cornerback Darrent Williams, 24, was fatally shot near downtown Denver, Colorado, on January 1, 2007. Running back Damien Nash, 24, died after collapsing at a charity basketball game later that winter.

"Kenny had a promising future on the football field, but more importantly, he was a great teammate whose smile and personality could light up the room. This is a tragic loss for our football team, and his family is in all of our thoughts and prayers during this difficult time," McDaniels said.