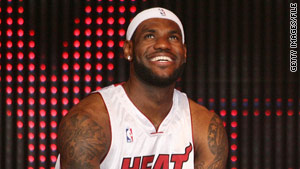 Washington (CNN) -- A filing on behalf of basketball superstar LeBron James dismisses as "rank speculation" claims by a Washington lawyer that he is the athlete's biological father, saying the man has "delusions" about alleged family ties.

Lawyers for James and his mother filed papers in federal court Monday seeking to dismiss a pending lawsuit. Leicester Stovell alleges the NBA all-star and his family have been involved in a cover-up to deny paternity, by committing fraud and misrepresentation.

The 14-page document said Stovell had completely failed to prove any of the facts alleged in his June 23 complaint. And they said he was motivated only by fame and money, calling Stovell's actions a "fanciful hope for celebrity."

The lawsuit claims Stovell met James' mother, Gloria, in a Washington bar and restaurant in 1984, when she was visiting from Ohio. She was 15 or 16 at the time, and Stovell says they had sex only once, and was informed by Gloria James months later that she was pregnant. He claims she told him the child would be named LeBron, similar to Leicester Bryce, Stovell's first and middle names.

Stovell is asking for unspecified millions of dollars in damages, and says he has been trying for three years to establish paternity, which he hopes would lead to financial and commercial opportunities. He is a solo legal practitioner in the District of Columbia, and filed the lawsuit on his own behalf.

He alleges a DNA test that showed he was not James' father was falsified.

"Stovell's claims for millions of dollars from his putative son and Gloria James are based upon rank speculation," said the court filing, "that a man who claims that as a 29-year-old lawyer he got a 15-year-old girl pregnant during a one-night stand and who never contributed a penny in child support would earn millions in commercial endorsements by crawling out of the woodwork after the child he never gave a thought to became an NBA star."

James, a native of Akron, Ohio, recently left the Cleveland Cavaliers to sign with the Miami Heat for what is believed to be one of the richest sports contracts in history. He is the reigning most valuable player of the NBA, and has carefully cultivated a public image as one of the most popular and talented athletes.

The complaint filed June 23 by Stovell said, "I recently have concluded that a comprehensive, sophisticated and well-funded effort might well have been under way for quite some time, perhaps beginning in its present form as early as when defendant LeBron James was in high school, to frustrate identification of his real father, and that there is a likelihood that the father in question is me."

James' lawyers think otherwise. "Stovell may truly believe that he is the father of LeBron James, even though a DNA test has told him otherwise. But his delusions do not give rise to a cause of action against either Gloria or LeBron James."

Public records show Stovell is a former government attorney with the Securities and Exchange Commission. He filed a lawsuit in 2002 against the agency, alleging racial discrimination. Federal court records show the case was settled when the SEC paid him $230,000, while not admitting fault.