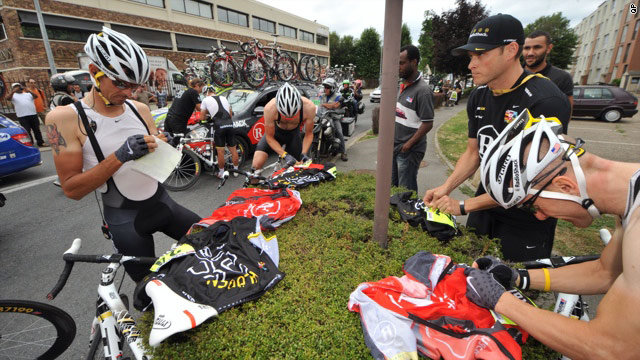 (CNN) -- The start of the final stage of the Tour de France was delayed Sunday when race officials asked Lance Armstrong and his team to remove their commemorative jerseys for cancer survivors.

The officials told Armstrong and his team to remove the all-black jerseys and continue to wear their official jerseys throughout the race, according to CNN's Chief Medical Correspondent Sanjay Gupta, who was at the event.

Armstrong was not a top finisher in his last Tour de France ever, but he and his team had planned to ride into Paris' Champs-Elysees with pride Sunday, wearing jerseys with the number 28 emblazoned on them. The number represents the 28 million people currently living with cancer worldwide -- a cause near to cancer survivor Armstrong's heart.

"Today, we're riding for every one of the 28 million people all over the world whose lives and families are affected by this disease," said Armstrong, explaining why Team RadioShack was swapping its official red-and-gray racing kit in favor of the black ones.

Alberto Contador won the Tour de France Sunday for the third time. His previous triumphs were in 2007 and 2009. Mark Cavendish won the 20th -- and final -- stage.

Armstrong, 38, was diagnosed with advanced testicular cancer in October 1996. He beat it, came back to win the Tour de France each year from 1999 until 2005, and launched the Livestrong Foundation that has raised hundreds of millions of dollars toward the fight against cancer.

After a four-year-retirement, he returned to the race in 2009 -- almost winning an eighth title. But this year, Armstrong finished 23rd. Armstrong and the rest of Team Radio Shack won the team competition, with their combined times faster than any other team.

Landis himself was stripped of his 2006 Tour title for doping.

Gupta is a board member of the Lance Armstrong LiveStrong Foundation.