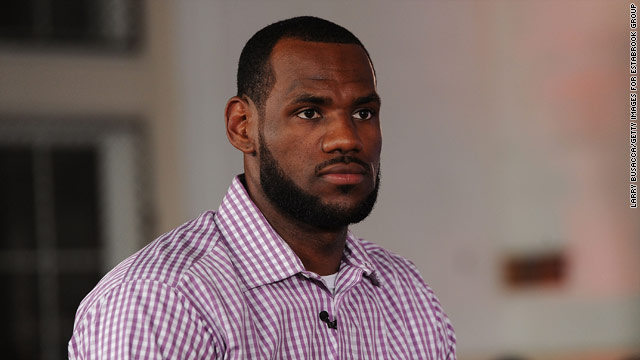 (CNN) -- The NBA has fined the Cleveland Cavaliers owner $100,000 for remarks he made after LeBron James announced he was leaving the team.

In a letter posted on the team's website Thursday, Gilbert called James' decision to play for the Miami Heat a "cowardly betrayal" and a "shocking act of disloyalty."

James, who joined the Cavaliers straight out of high school and played forward for the team for his entire career, announced his decision to leave the team during a much-ballyhooed ESPN special Thursday entitled "The Decision."

In a press conference which was posted on the NBA's website Monday, Stern said that James was "certainly entitled" to leave the team, but he would have advised the basketball star to handle his departure and announcement differently.

"I think that the advice that he received on this was poor. But his performance was fine. His honesty and his integrity I think shine through, but this decision was ill-conceived, badly produced and poorly executed," Stern said.

"Equally imprudent I believe are the remarks by my good friend Jesse Jackson, which purport to make this into a racial matter... he really is mistaken," Stern said.

Before deciding to join the Miami Heat, James, a reigning two-time NBA MVP, looked at several teams, including New York, Chicago and Cleveland.

He said it came down to one thing.

"The major factor was the best opportunity to win now and to win in the future." James said.

He led the Cavaliers to the NBA finals in 2007, where they lost to the San Antonio Spurs, but never reached the finals again, despite Cleveland management bringing in supporting stars such as Shaquille O'Neal and Antawn Jamison.