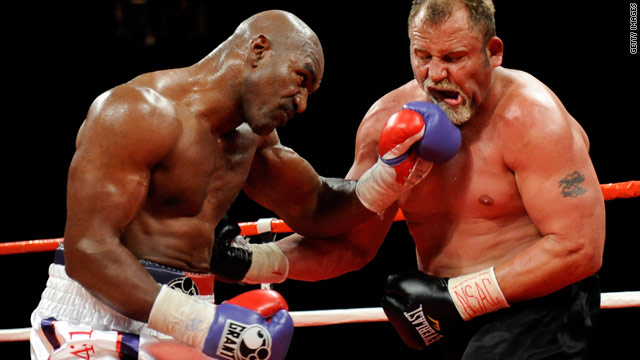 (CNN) -- At the age of 47, boxing legend Evander Holyfield is still hoping to become the world heavyweight champion for a record fifth time.

The American, who famously defeated Mike Tyson in 1996 to win the WBA title before having part of his ear bitten off in the rematch, extended his illustrious career into a fourth decade when he beat fellow veteran Francois Botha in Las Vegas to claim the little-regarded WBF crown.

While current WBA champion David Haye of Britain is expected to face one of the title-holding Klitschko brothers -- IBF/WBO king Wladimir or WBC champion Vitali -- in his next fight, Holyfield has staked his claim to be considered as a future challenger.

"I'm going to be the undisputed world heavyweight champion," he told reporters after beating his 41-year-old South African opponent, who lost on points in his second defense of the title in front of a small crowd of about 3,000 people on Saturday night.

Holyfield's last bid at a recognized heavyweight title saw him defeated on points by giant Russian Nikolai Valuev in a WBA bout in 2008.

This is a new era and I didn't think I'd be in it... You can't let people tell you what you can do. I fight because I want to
--Evander Holyfield
RELATED TOPICS

"I've been telling people since 1992 when I lost to Riddick Bowe that I was going to be undisputed heavyweight champion of the world. I won two but not the third," he said.

"Botha gave me an opportunity. People talk about my legacy. It's about who you've fought. They can't deny me -- I fight the best. I always want to fight somebody to get a little credit if I beat them."

Holyfield, an Olympic bronze medallist who won his first professional fight in 1984, said that he would ignore critics who said he was too old to be taken seriously.

"He didn't beat me but he did become world champion again. What I learned from that fight was George said it wasn't about age but that I will give my all.

"You can't let people tell you what you can do. I fight because I want to. I wouldn't be the person I am without opportunities."

British fighter Audley Harrison, the 2000 Olympic champion, also added his name to the list of possible contenders after knocking out Michael Sprott on Friday to win the vacant European title.

The 38-year-old, who said he would retire if he did not avenge his career-damaging 2007 defeat by Sprott, was behind on points before winning with a final-round stoppage.