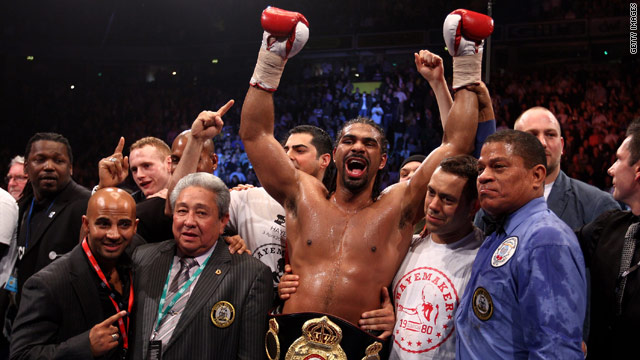 Londoner Haye, 29, overwhelmed his American opponent from the start until the contest at the MEN Arena was eventually was stopped in the ninth round before a 20,000 sell-out crowd.

Ruiz, 38, a two-time heavyweight world champion, was attempting to join three greats of boxing -- Muhammad Ali, Evander Holyfield and Lennox Lewis -- as the only fighters to claim the title three times.

But, at times, he looked outclassed by the smaller, quicker Haye, who overwhelmed Ruiz with the speed and accuracy of his punching, before the American's corner rescued their man towards the end of the ninth round.

Haye proved that his points decision victory over giant Russian Nikolai Valuev last November was no fluke -- and he admitted afterwards that he was pleased with his display.

"I am really happy with that. I felt really sharp," Haye told BBC Radio 5 Live. "There were a load of fans here. The crowd has been absolutely electric for me.

"There was a 20,000 capacity here with everyone screaming the 'Hayemaker'. "With performances like that I'll keep the fans behind me. I loved the whole occasion."