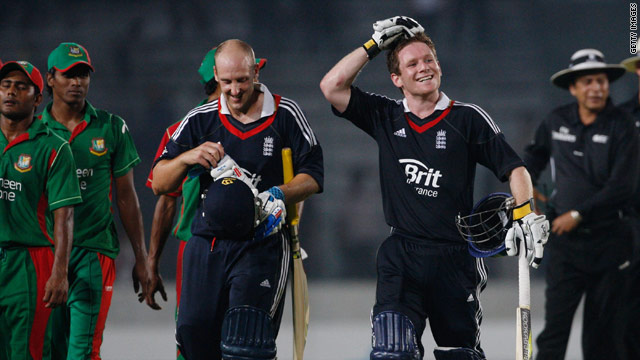 (CNN) -- Former England Test star Andrew Flintoff admits there is a "slim possibility" he has played cricket for the last time.

The all-rounder retired from Tests after last summer Ashes series against Australia, but hopes to play one-day and Twenty20 internationals for England as well as turning out in the lucrative Indian Premier League.

The 32-year-old had knee surgery after the Australia series and even harbored hopes of playing in the current series against Bangladesh, but he has required a further operation to set back his recovery.

"If the worst thing did happen and I can't play cricket, I don't want to arrive at the end of it scratching my head," Flintoff told BBC Sport on Tuesday.

"It is a slim possibility," he admitted.

"Cricket has been such a big part of my life that when I'm not playing it is hard. I want it back," he added.

Meanwhile, his England teammates survived an almighty scare before seeing off Bangladesh by two wickets in a one-day international in Mirpur.

Cricket has been such a big part of my life that when I'm not playing it is hard. I want it back
--Andrew Flintoff

Only a breathtaking unbeaten century from Eoin Morgan prevented England from falling to their first-ever defeat to the cricketing minnows.

As wickets tumbled around him, Morgan, who started his international career with Ireland, kept his nerve and smashed 16 off the penultimate over from the unfortunate Shafiul Islam to finish on 110 not out.

Chasing 261 for victory in their 50 overs only stand-in captain Alastair Cook with 60 offered much support to Morgan, who finished the match with a mighty six to silence the capacity crowd packing the ground in Mirpur.

Mushfiqur Rahim (76) and Imrul Kayes (63) were the star performers for Bangladesh with the bat as they made 260 for six wickets.

A superb spell of three wickets for 32 in 10 overs by left-armer Shakib Al Hasan looked to have set up a Bangladesh victory, but Morgan found late support from debutant David Tredwell to help England over the line.

The victory gives them an unbeatable 2-0 lead in the three-match series.