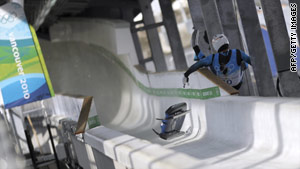 Nodar Kumaritashvili was launched from his sled at a reported 89.7 mph last week.

(CNN) -- Changes to the Winter Olympics have raised questions about safety, but experts say the games' transformations mark a natural evolution rather than an attempt to make competitions more dangerous and exciting.

Not only are new games such as ski cross and the half-pipe competition perilous by nature, but technological advances -- like those applied at the $110 million Whistler Sliding Center, the site of a fatal luge wreck last week -- also can make veteran games more foreboding.

"That same hill that was here when the dinosaurs were here is inherently more dangerous," Dr. Kevin Plancher, a doctor for the U.S. Ski and Snowboard Team, said, explaining how today's ski courses are faster than slopes of old.

Americans Shaun White and Kevin Pearce demonstrated the danger of snowboarding -- one of several "extreme sports" added to the Olympic roster since 1998 -- when they wiped out on half-pipe runs in recent weeks.

Video of White's crash went viral after the snowboarding icon face-planted on a half-pipe. He escaped injury and is scheduled to compete later this week. The less-fortunate Pearce remains in a Colorado hospital after suffering a brain injury on New Year's Eve.

There also are concerns on the non-extreme side, as improvements in equipment and course design make winter sports faster and trickier. Skiing champ Aksel Lund Svindal, blogging in December, cited 17 injuries sidelining skiers this season, saying such a rate was "not OK" and lamenting his counterparts who were injured through no fault of their own.

Plancher, however, said athletes, being competitive by nature, can sometimes push themselves too hard, inviting greater chances of injuries.

"We have to educate our athletes to what they should or should not be doing," Plancher said. "It's about pride, and it's about country and we don't want to give our lives for it."

Nodar Kumaritashvili, 21, did just that last week when the Georgian luger died at Whistler Sliding Center, which hosts the 2010 luge, bobsled and skeleton competitions.

Even in slow motion, it's difficult to see exactly what happened. Kumaritashvili hurtles around Curve 16 at a reported 89.7 mph and drops clumsily to the track, slamming into the opposite wall. The sled bucks Kumaritashvili back-first into a metal pole, killing him.

His death sparked allegations that the Whistler track, touted as the world's fastest, was too fast. Special attention was paid to remarks that International Luge Federation President Josef Fendt made in 2008.

Fendt expressed concerns that sliders, as they're known, were reaching speeds of 92.5 mph at Whistler and said, "This is not in the interest of our International Luge Federation and it makes me worry."

He continued, "We've always assumed that, on principle, top speeds of [about 84 mph] were possible. But we didn't reckon with such a leap."

Despite Fendt's assertions, the federation reported in December 2008 that the 73 crashes occurring during 2,500 runs at Whistler represented a "normal" crash rate when tracks are being tested.

That has placated neither Kumaritashvili's father, who reportedly said his son was concerned about the track's safety, particularly in the fateful 16th curve, nor Australia's Hannah Campbell-Pegg, who reportedly questioned whether she and her colleagues were "crash-test dummies."

The International Olympic Committee and luge federation released a joint statement saying an error by Kumaritashvili -- and not track deficiencies -- led to the wreck. It also said it was taking a "preventive measure" of raising the wall in curve 16, changing the ice profile and shortening the track.

"The name of the game is always to go faster, faster, faster," said Patrick Quinn, a former Olympic luge hopeful. "The sport is fast. That's why we're in it. We like that."

Quinn had his own terrifying crash in 2005. In preparation for the Turin, Italy, games, Quinn and Christian Miccum put new steel runners on their doubles sled to see if they could shave fractions of a second off their time.

"We took a run and got up to speed, lost control of the sled in the most challenging turn and had an accident," said Quinn, a partner with Chicago Sports & Entertainment Partners, which represents Miccum and teammate Tony Benshoof.

Miccum cracked his helmet and was rushed to the hospital with a breathing tube. He recovered within weeks and was able to compete in a singles event at the Turin games. He and Quinn did not qualify for the doubles event.

The Turin track was considered fast at the time as well, but increased speeds are part of the sport, as are breakthroughs in safety equipment, said Quinn, who also has attempted to qualify for Olympic speed-skating and ice hockey teams.

"I've been much more severely hurt playing ice hockey than I was at any time in luge," he said.

Plancher, the ski team doctor, said advances in athletes' conditioning should also be considered when gauging a sport's safety.

"As athletes now train harder, they are producing bodies that can do things we didn't know our bodies could do years ago," he said.

As courses become more challenging, athletes more fit and equipment more cutting edge, governing bodies should routinely assess the changes and the best means to protect athletes, even it's from themselves, Plancher said.

"[Advances] don't catch up at the same time, but for the most part we're doing a pretty darn good job because you don't hear about accidents every day," said Plancher, who also is a New York-based orthopedic surgeon.

Gordy Sheer, an Olympic silver medalist who now works for the U.S. Luge Association, concedes there are risks to the sport but believes cries of rampant danger are overblown. The rate of injury in luge competitions, he said, is about the same as in soccer.

"Luge, versus other sports, actually has a pretty commendable safety record," he said. "You have to think about the overall picture."

Indeed, before last week, the only slider to die in the Olympics was Britain's Kazimierz Kay-Skrzypeski, killed during a training run for Austria's 1964 games. It marked the first year luge was an event.

More Olympians have died skiing, including Australian Ross Milne, who died after hitting a tree in preparation for the Austria games. In 1988, Austrian Ski Team doctor Jorg Oberhammer died after colliding with a snow-smoothing machine. Swiss speed skier Nicholas Bochatay died similarly in 1992.

As long as people take part in dangerous sports, injury and death will be considerations, Plancher said, but the key is finding a balance between a sport's innovations and its athletes' well-being.

"There's a good, fine line between entertainment and safety," he said. "We can still give great entertainment on the half-pipe or other places, even if they don't go to the highest heights."