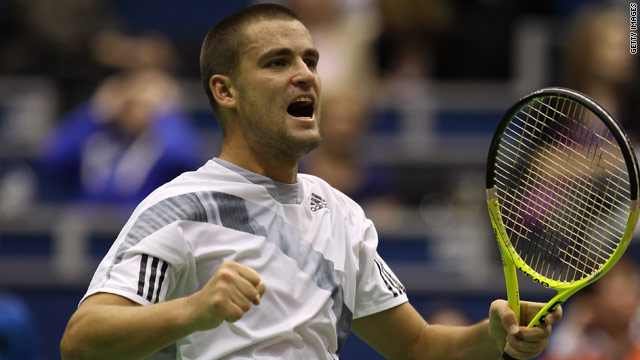 (CNN) -- Robin Soderling shrugged off his poor form this season to win the ATP tournament in Rotterdam as final opponent Mikhail Youzhny was forced to retire hurt on Sunday.

Swede Soderling had a tremendous 2009, reaching the final of the French Open, but this year had lost in the first round of all his tournaments.

But after a fine run to the final in the Dutch port city, Soderling claimed his fifth ATP Tour title as Zouzhny was forced to quit with a wrist injury.

The Russian, who had put out top seed Novak Djokovic in the semifinals, was trailing a set and 2-0 when he decided to call it a day.

He had suffered a similar injury in the third round of the Australian Open where he pulled out of his clash against Lukasz Kubot.

"I started out struggling a bit in my first two rounds, struggling to find my form, but I worked hard and managed to get better with every match. Obviously it's not the way I wanted to win today with Mikhail retiring injured but I am still very happy to end the week with another title," he added.

Second seed Verdasco claimed a 3-6 6-4 6-4 win over the American favorite who was bidding for his fourth title in the tournament and his 29th career title.

Meanwhile, on the women's WTA Tour, top seed Elena Dementieva of Russia fought back from a set down to beat Czech Lucie Safarov in the final of the Open GDF Suez tournament in Paris.

Dementieva eventually secured a 6-7 (5-7) 6-1 6-4 victory over Safarova to go one better than last year when she lost to home hope and now retired Amelie Mauresmo.

Zvonareva is the first player to achieve the feat.