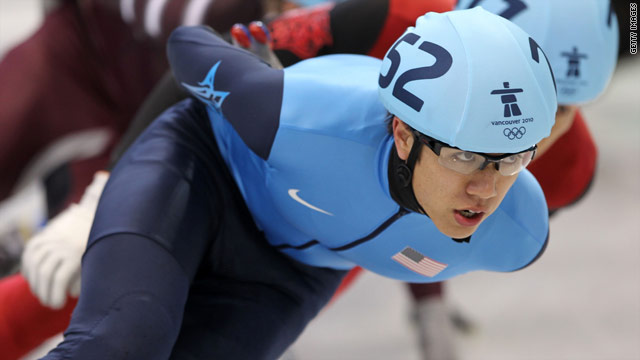 Vancouver, British Columbia (CNN) -- There was no way he should have been on that medal stand. Going into the final turn of Saturday night's 1,500-meter short-track speed skating final, J.R. Celski was fifth. The South Korean skaters had a firm grasp on the gold, silver and bronze.

And then inexplicably, two of the South Koreans crashed, and the 19-year-old Celski followed teammate Apolo Anton Ohno across the finish line to stunningly finish second and third.

Kind of a miracle, but Celski has overcome much bigger odds.

Five months ago, it would have impossible for someone to think Celski could win a medal, or even be here. He lay on the ice after a full-speed crash at the U.S. Trials, bleeding profusely, his left thigh sliced open by a skate blade. The cut was six inches wide and two inches deep. It would require 60 stitches.

But first he had to remove the blade, which was still stuck in his leg. There was so much blood, he wondered if he was going to skate again. He didn't know it at the time, but the gash was just an inch from the main artery in his leg. Fortunately, the blade only cut muscle.

"When I was laying on that ice, I was in defeat at first," he said Sunday. "I thought my whole career was over. But I guess in those moments is where we truly define ourselves."

At the hospital, Celski asked someone to take a photo of the gash. It is a nasty picture, and while Celski is keen to show it to anyone who will have a look, it is the only time he reflects on the injury.

"After it happened, I knew I needed to get back on my feet, and the way to do that was to not think about it," he said.

Celski jumped right into rehabilitation under the care of Dr. Eric Heiden, the speed skating legend who is now an orthopedic surgeon, and then Dr. Bill Moreau, the director for sports medicine clinics for the U.S. Olympic Committee.

"There are never any guarantees with an injury like this, but I will say this: Whatever happens to J.R., it will not be because of a lack of effort. He is working so, so hard," Moreau told freelance writer Joanne C. Gerstner in early November.

By October, Celski was able to throw away his crutches. Though he still couldn't skate, he stayed motivated by going down to a rink near his place at the training center in Colorado and watching the skaters from a local club.

He finally got back on the ice on November 16, just eight weeks before the Olympics. It was difficult for him, and he was tentative and he skated very slowly, he said.

"I did have flashbacks at first," he said.

He even fell a few times during training, which was a good thing because it helped his mental recovery. He found a toughness inside, he said, and his family helped immensely. It was as important as his physical rehabilitation.

Before his injury, Celski was the heir apparent to now six-time medallist Ohno. Before his first Olympic race, his first since the crash, he was just a question mark.

Now, with two races, the 1,000 meters on Saturday and the 5,000-meter relay on February 26 remaining, he's a remarkable comeback story with an unending smile and a most unusual picture on his iPhone.