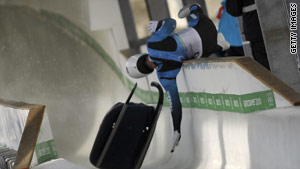 Vancouver, British Columbia (CNN) -- The luge track on which a Georgian athlete died during an Olympic training run will reopen Saturday after officials found it had no deficiencies, the Vancouver Olympic committee and International Luge Federation said.

Officials will, however, modify the track at the curve where the crash happened to prevent the possibility of another fatal accident, they said.

The decision to reopen the track at the Whistler Sliding Center came after the British Columbia Coroners Service and the Royal Canadian Mounted Police concluded their on-scene investigations. The Coroners Service is responsible for investigating all sudden deaths.

Technical officials from the International Luge Federation further investigated the accident before announcing the track would reopen.

Georgian luge athlete Nodar Kumaritashvili, 21, was on his final official training run when he had a "serious crash" near the end of the 4,500-foot-long course Friday afternoon.

As he came out of the course's 16th and last turn, Kumaritashvili was thrown from his sled and struck a steel pole at the side of the track. Although he was given CPR at the scene and taken to a hospital, doctors were unable to revive him, the International Olympic Committee said.

Kumaritashvili had been scheduled to compete in the men's singles luge event, which begins Saturday. The track was closed after the accident.

The Vancouver Olympic Committee and the luge federation, known by its French initials FIL, outlined their findings in a joint statement.

"It appears after a routine run, the athlete came late out of curve 15 and did not compensate properly to make correct entrance into curve 16," they said. "This resulted in a late entrance into curve 16 and although the athlete worked to correct the problem he eventually lost control of the sled resulting in the tragic accident. The technical officials of the FIL were able to retrace the path of the athlete and concluded there was no indication that the accident was caused by deficiencies in the track."

The track will reopen after officials raise the walls at the exit of curve 16 and change the "ice profile," they said.

"This was done as a preventative measure, in order to avoid that such an extremely exceptional accident could occur again," the statement said.

Luge is often called the "fastest sport on ice." Sliders use their legs and shoulders to steer small fiberglass sleds down an icy track, at times approaching or surpassing speeds of 90 mph, according to the Vancouver 2010 Winter Olympics Web site. They are positioned on their backs with their feet straight out in front of them and their heads back to be as aerodynamic as possible.

He noted that while most luge courses "flatten out" around the 11th turn, the Whistler track "just keeps on dropping so there's really kind of no break from gathering speed toward the end."