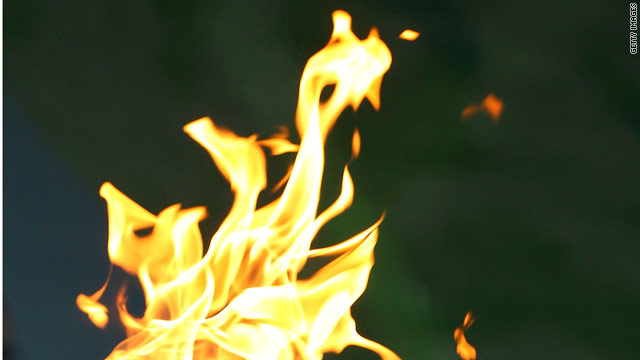 The Olympic flame will reach BC Place on Friday in Vancouver, British Columbia, for the opening ceremonies.
STORY HIGHLIGHTS

Vancouver, British Columbia (CNN) -- The death of a luger Friday cast a pall over the Olympics just hours before the caldron-lighting ceremony that would officially begin the Games.

"Our first thoughts are with the family, friends and colleagues of the athlete," said Jacques Rogge, president of the International Olympic Committee. "The whole Olympic family is struck by this tragedy, which clearly casts a shadow over these Games."

Nodar Kumaritashvili, 21, of Georgia died after crashing and being propelled off the track during a training run, according to the IOC.

Before the tragedy, speculation had focused on who would light the Olympic caldron at Friday night's opening ceremonies. Some have said the national honor would go to NHL legend Wayne Gretzky, but others have campaigned for Betty Fox, the mother of the late Terry Fox, a national hero.

While battling osteosarcoma in 1980, Terry Fox set out to cross Canada, running about the equivalent of a marathon each day to raise money for cancer research. But Fox, who had a prosthetic right leg, had to quit after 143 days as his cancer spread. He died less than a year later.

The idea of a hologram of Fox carrying the torch the final steps also has been floated.

Hundreds of millions of people are expected to tune in on televisions around the world for the event, which begins at 6 p.m. local time. There will be no worries about the weather; these are the first ceremonies to be held in a domed stadium.

Canada hopes to make a good impression on viewers of the games, which will take place over 17 days.

"Hosting these games is an achievement on the world stage that all British Columbians and all Canadians can be proud of," British Columbia Premier Gordon Campbell said. "Together, we have welcomed the world with open arms to see and experience our nation, our province and our communities."

Singers Bryan Adams and Sarah McLachlan will be among the acts at the opening ceremonies, and one of the highlights will be a ski jumper leaping through the Olympic rings, according to the Ottawa Sun.

The Olympics are a point of national pride for this nation, which failed to win a gold medal at the Calgary Games in 1988. Canada has poured a reported $117 million into its Own the Podium program, designed to create a team that leads the total medal count at these games. That should take at least 27 medals, three more than 2006 when Canada was third in the medal count.

Share your videos, photos of Olympic excitement around the world

Not every Canadian is excited about the games. Protest organizers have said they hope to launch a large demonstration Friday night outside BC Place, site of the ceremony. They will gather blocks away and then march toward the facility just before the ceremony begins. They will be protesting many things, including the money spent on the games.

Although weather is not a concern for the opening ceremonies, the unseasonably high temperatures have brought little snow to the area. But Olympic officials and athletes said that too much has been made of the conditions and that the courses in Whistler, two hours to the north, and nearby Cypress Mountain will be ready.

Meanwhile, the speculation about the caldron lighter will continue right up until the moment the flame is lit.

The government would like to see an aboriginal athlete do the honor, according to media reports, but others have said it should be wheelchair athlete Rick Hansen.

The identity of the person or persons is still secret.

"It's one of those challenges you have where only one or two people can know, or it isn't going to stay locked down," said John Furlong, CEO of the Vancouver Organizing Committee. "And I have gone to bed and woke up every day for the last 90 days praying I wouldn't see it on the front page of the papers. And so far it hasn't."