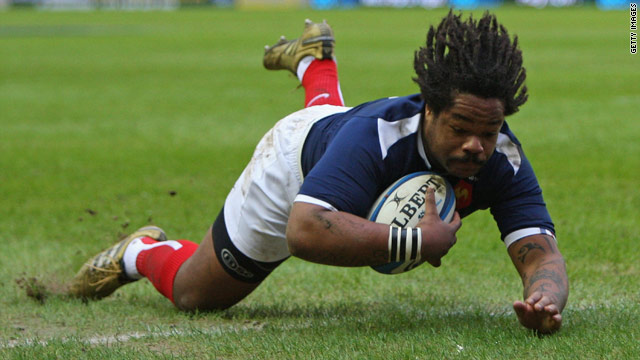 Mathieu Bastareaud scores the opening try for France against Scotland at Murrayfield in Edinburgh.
STORY HIGHLIGHTS

(CNN) -- Mathieu Bastareaud returned from the international rugby wilderness to score two tries as France opened their Six Nations campaign with an 18-9 victory away to Scotland on Sunday.

The center made his first start since being cast aside after fabricating a tale of being assaulted during France's tour of New Zealand in June last year.

The 21-year-old crossed for his first five-point scores at the highest level, having made his debut in the 2009 Six Nations before causing controversy when he claimed he had been attacked outside his hotel to explain facial injuries.

He later admitted being drunk and falling over a table in his room, but speculation over the incident continued and French sports paper L'Equipe reported that he had psychiatric treatment following a suicide attempt.

However, Bastareaud scored the first try of the game in Edinburgh in the 12th minute following a five-meter scrum, and powered over the line again out on the left seven minutes before halftime.

We conceded two soft scores, and if we do that we're not going to beat anybody
--Scotland coach Andy Robinson

Scrumhalf Morgan Parra converted to give France a 15-6 lead and then kicked his second penalty five minutes after the interval.

Chris Paterson, playing his 99th international for Scotland, kicked his third penalty to reduce the deficit but the home side never looked like breaching the try line of last year's third-placed team as France could afford to see Parra miss another attempt at goal.

Scotland coach Andy Robinson was left to rue defensive lapses ahead of next weekend's trip to Wales, who lost 30-17 to England on Saturday.

"We conceded two soft scores, and if we do that we're not going to beat anybody," the Englishman told reporters. "It was hard against a good French scrum. The French were very canny in what they did."

France winger Vincent Clerc praised teammate Bastareaud, who was banned for three months after his admission of lying.

"It was a good performance after some problems in July. He had a great match with two tries and some great defense," Clerc said.