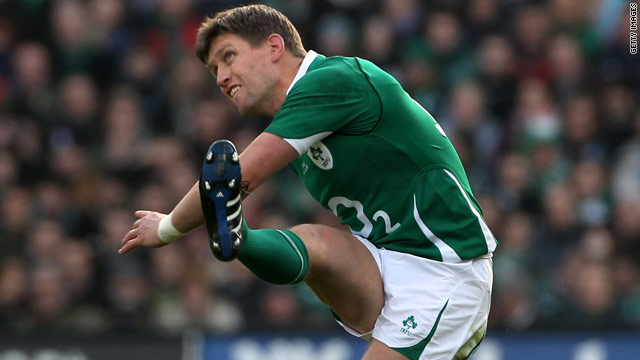 (CNN) -- Ireland opened the defense of their Six Nations rugby title with a 29-11 victory at home to Italy, while England repelled the challenge of Wales to win 30-17 in Saturday's other match.

Ireland, who won all five matches last year to complete a Grand Slam, led 23-8 at halftime in Dublin but could not run away with victory against a determined visiting team.

Recalled flyhalf Ronan O'Gara became the first player to score 500 points in the tournament as he was successful with all six kicks at goal, while Jamie Heaslip and Tomas O'Leary crossed for first-half tries.

Italy's only try came just before halftime, despite the sin-binning of center Gonzalo Garcia meaning coach Nick Mallett's team were reduced to 14 men, after a charge-down of Rob Kearney's kick by Kaine Robertson.

"It's not easy to click immediately having only been together for two weeks and not having played together since November," Ireland captain Brian O'Driscoll told reporters.

"There is plenty to improve on. It's the first one and job done. We'll take the positives out of it and move on. We showed an ability in the first half to turn defense into attack and the amount of lineout ball we won was a big plus.

"We made some good line breaks but didn't finish them off. Maybe we need to improve our support play."

England flanker James Haskell scored two tries to lift the pressure on head coach Martin Johnson, as Wales paid the price for Alun-Wyn Jones' sin-binning with 17 points conceded while the lock was off the field at Twickenham.

The match was level at 3-3 when Jones was yellow-carded for leg-tripping England hooker Dylan Hartley, and the hosts subsequently scored a penalty and two converted tries, Haskell's first in Tests and another five minutes after halftime by scrumhalf Danny Care.

Wales battled back to 20-17 down with eight minutes left as Jones made some amends by setting up prop Adam Jones for a try and then James Hook crossed for another.

But four minutes later Haskell went over again thanks to Delon Armitage's interception, and then Jonny Wilkinson kicked his third penalty, this one from the halfway line to give the flyhalf 15 points for the match.

Wales coach Warren Gatland was furious after Jones' indiscipline cost his side dear.

"We are frustrated and disappointed. We felt that was a game that has slipped from our grasp," the New Zealander told reporters.

"The yellow card has cost us 17 points -- it was one of those things, stupid. It was massive. Sometimes those things are very, very costly, and it was for us today.

"We had stressed discipline over the past two weeks and talked about giving nothing soft away, and it is frustrating we have done that. He has made an impulsive decision, and hopefully it is a learning experience for him and he doesn't do it again."

France travel to Scotland for the opening round's other match on Sunday.