Mayweather to fight Mosley in Vegas 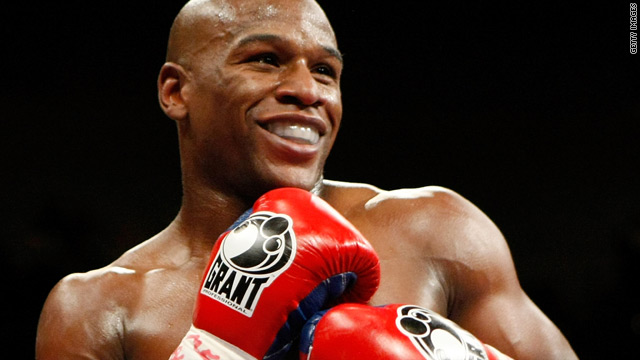 (CNN) -- Floyd Mayweather Junior has confirmed that he will fight WBA welterweight super champion Shane Mosley in Las Vegas on May 1 following the controversial collapse of his much-hyped showdown with Manny Pacquiao.

The 38-year-old Mosley, a three-weight world title winner, had already signed up for the bout at the MGM Grand, which will take place under the Olympic-style random blood testing drug protocols that Pacquiao refused to accept.

The undefeated Mayweather, a six-time world champion at five different weights and Pacquiao's chief rival for the pound-for-pound bragging stakes, said in a statement that he was looking forward to taking on his fellow American.

"This one is definitely for the fans as I wasn't going to waste anyone's time with a meaningless tune-up bout and asked to fight Shane immediately," the 32-year-old said.

"I have said ever since I came back to the sport that I only wanted to fight the best. I think Shane is one of the best, but come May 1, he still won't be great enough to beat me.

Mosley had been due for a unification bout on January 30 with Andre Berto, who claimed the WBC title that Mayweather vacated when he retired in 2008, but the fight was scrapped when his opponent lost family members in the Haiti earthquake.

I have always wanted to fight Floyd, and now it is finally coming true. I will have no problem beating him
--Shane Mosley

"I have always wanted to fight Floyd, and now it is finally coming true," Mosley said. "I am already in great shape and ready to show everyone on May 1 that I am stronger, faster and better than he is. I will have no problem beating him."

Mosley's promoter Golden Boy took the chance to have a dig at Filipino star Pacquiao over his refusal to undergo blood testing in the lead-up to the planned fight with Mayweather.

"Shane Mosley is one of the greatest fighters of this era and I commend him for not only agreeing to the fight against Mayweather, but also agreeing to participate in a testing process that can only help the integrity of the sport," Golden Boy chief executive Richard Schaefer said.

Leonard Ellerbe, his counterpart at Mayweather Promotions, also weighed in on the matter.

"Floyd has been trying to make this fight for the last 10 years, so he is extremely excited about the opportunity to face Shane. He can't wait to extend his undefeated record and perform at the highest level," Ellerbe said.

"More importantly, he is also happy to set the precedent for random blood testing in order to ensure fair and safe contests for all fighters."

Pacquiao will defend his WBO welterweight title against Ghana's Joshua Clottey in Dallas on March 13 before returning to politics as he seeks election in his local constituency.