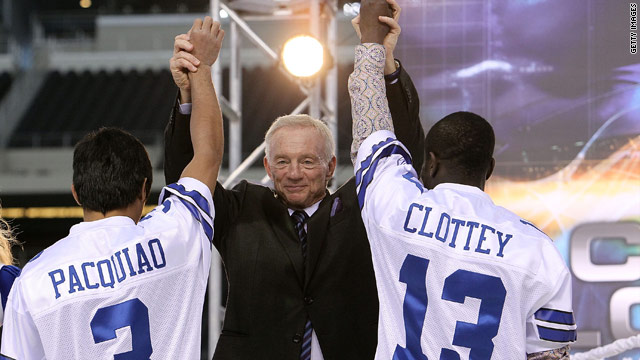 (CNN) -- Manny Pacquiao has put failed talks of a fight with Floyd Mayweather Jnr behind him as he turns his focus to a bout with Joshua Clottey at the Cowboys Stadium.

The Filipino will defend his World Boxing Organization (WBO) welterweight title against Ghanaian Clottey on March 13 at the $1.2billion home of the Dallas Cowboys football team.

Pacquiao had been scheduled to face unbeaten American Mayweather on the date before the proposed super-fight collapsed when the Filipino rejected requests from his opponent to have unprecedented random blood testing.

But the 31-year-old confirmed that he is now fully focused on his new opponent, not any possible fight with Mayweather.

It's going to be a good fight," Pacquiao said at a press conference to promote the fight.

"Clottey, he is a good fighter, a top fighter, and he is bigger than me. I have to prepare hard for this fight and train hard and focus."

I have to prepare hard for this fight and focus.
--Manny Pacquiao

When asked about Mayweather, Pacquiao's trainer Freddie Roach said things had moved on but revealed his fighter would be ready to take on the American on the right terms.

"Life goes on without Mayweather. He wouldn't agree to a limit of 14 days before the fight. We did our best to appease him but he wouldn't go along with it," Roach explained.

"Mayweather's people agreed to it but Mayweather wouldn't go along with it. I don't think he wants to fight Manny. It was a smoke screen for him to say no.

"I want to beat this guy's ass, believe me, but he won't give us the opportunity. We will fight him any day of the week. But he doesn't make the rules."

Any Pacquiao-Mayweather fight would have been staged in Las Vegas and Cowboys owner Jerry Jones added that the breakdown in talks benefited him.

"It did. This gave us an opening. We were very aggressive and we were pretty quick to make a deal," Jones said.

"We're going to make this one of the most interesting fights to view that there's ever been. We're going to have some fun with it."