2010 Obsessions: Year of the mistress 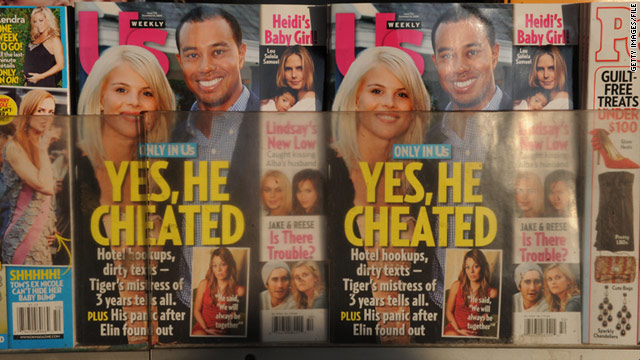 Tales of celebrity infidelity were plastered all over the news in 2010.
STORY HIGHLIGHTS
RELATED TOPICS

(CNN) -- Who needs a scarlet letter when you've got tabloids?

2010 was a year of celebrity mistresses, as the media covered them and the public followed every salacious detail. From Tiger Woods -- whose scandal actually broke in 2009, but mushroomed in 2010 -- to Jesse James, reports of celebrity straying were everywhere from celebrity magazine covers to internet gossip sites.

And accompanying the straying men would inevitably be the alleged "other woman."

"He cheated on (fill in the blank) with HER?" was an oft-heard phrase used in reference to these women.

"People love to read these types of stories," said Us Weekly senior editor Ian Drew whose magazine reported on the marital woes of Tiger Woods as well as Jesse James and now ex-wife Sandra Bullock. "They obviously want to see what the (other) woman looks like and who would leave such a beautiful, talented person for this person."

How a mistress turns infamy into money

Some of the alleged mistresses gave the public more to look at than others.

Be it the tattooed body of model and alleged James mistress Michelle "Bombshell" McGee or the highly touted assets of self-proclaimed Woods mistress, and adult film star Devon James, those branded as the "other woman" often became celebrities themselves -- even if only for a short time.

The straying men often go to the media to try to explain or apologize for their behavior.

At a press conference in April, Woods said, "All I know is, I acted just terribly, poorly, made just incredibly bad decisions and decisions that I've hurt so many people close to me." Bullock's ex, James, was a bit more forthright when he spoke with ABC's "Nightline":

"When I was doing it, you know, one, I knew it was horrible, it made me feel horrible. And two, I knew I would get caught eventually, and I think I wanted to get caught."

The public's enormous interest is not surprising, said Elizabeth Abbott, author of the book "Mistresses: A History of the Other Woman" which is set to be released in the United States in 2011.

"It is fascinating to learn that a celebrity has a mistress because, on several levels, we are not surprised," Abbott said. "Celebrities are larger than life and usually rich -- or at least much richer than we are -- and mistresses are one of the fruits of celebrity."

What can be shocking, the writer said, is the celebrity's choice of mistress which the public feels free to comment upon.

"Her status as mistress subjects her to a media free-for-all -- no comment is deemed off bounds," Abbot said.

"John Edwards cheated on Elizabeth with ... Rielle Hunter? Couldn't he have done better than that," Abbot said, paraphrasing a common refrain about the "other woman."

"What about Michelle McGee, the tattooed woman whom Jesse James allegedly preferred to elegant, refined and lovely Sandra Bullock? What woman could be more alluring than the gorgeous Eva Longoria, whose husband Tony Parker nonetheless seemed oblivious to her charms and took up with their mutual friend's wife?"

Abbott said the intensified media coverage just increases the scrutiny as the public is treated to the most intimate details.

"We see photographs and are given detailed, trivial and often embarrassingly intimate information about the relationship: leaked e-mails, tweets, phone calls, Facebook comments," the author said. "We are treated to expert opinions about the relationship. We know that these mistress revelations will be one of the top 10 most e-mailed stories, usually beating out all but the most dramatic national news and foreign crises."

Lillian Glass, author of the book "Toxic Men: 10 Ways to Identify, Deal with, and Heal from the Men Who Make Your Life Miserable," said watching celebrity marriages implode over infidelity flies in the face of the fairy tale.

"In society, one out of every two marriages ends in divorce and in some societies it seems like one out of every one," Glass said. "We want to see these marriages survive. You want to see a Sandra Bullock and a Jesse James who are so diverse succeed. When we don't see that, it kind of makes us feel vulnerable."

And while it takes two to tangle, it's the other woman who is often vilified, Glass said. Rachel Uchitel, for example, will always be known as the woman first linked with Tiger Woods, she said. Uchitel has been judged harshly because she appears to be "trying to extend her 15 minutes of fame" with a stint on the VH1 reality show "Celebrity Rehab with Dr. Drew," she said.

Uchitel joined the show, she has said, to deal with being a love addict. In the course of her treatment, she decided to pursue an ironic career path for a woman famously accused of helping to topple the public image -- and possibly marriage -- of one of sports biggest stars.

She is studying to become a private investigator.