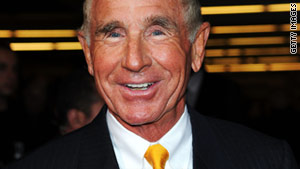 Los Angeles (CNN) -- Zsa Zsa Gabor's husband holds the title of prince but he may look more like a movie pirate for the next two weeks as he wears a patch over an eye.

"It was dark and he grabbed his wife's nail glue instead of eye drops," Blanchette said.

"It was stupid," Von Anhalt said after a doctor repaired the damage at a Beverly Hills eye clinic.

When Von Anhalt returned to his Bel Air, California, home later Tuesday morning he moved his wife's nail glue from the couple's bathroom. "She doesn't use it anymore," Von Anhalt said.

Von Anhalt, 68, will have to wear the patch over his right eye for two weeks, he said.

Gabor, 93, suffered an eye injury years ago when she mistakenly used "crazy glue" on her eyelashes, her daughter Francesca Hilton said.

She has been frail and "pretty much confined to a wheelchair" since a 2002 car accident, Von Anhalt said. The crash happened when the car in which she was riding with her hairdresser slammed into a light pole on Sunset Boulevard in Los Angeles.

Gabor underwent hip replacement surgery last summer after she fell from her bed.