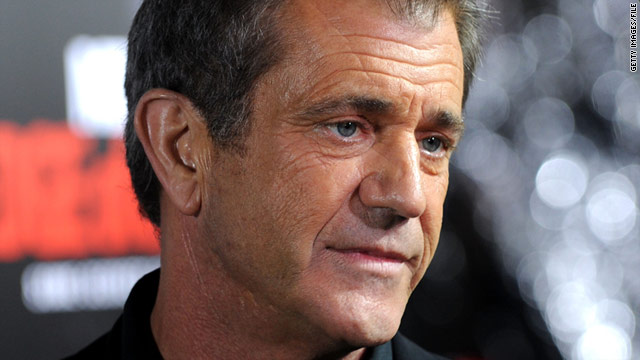 Mel Gibson is just one of the celebs for who 2010 has been a repeat year of scandal.
STORY HIGHLIGHTS
RELATED TOPICS

(CNN) -- It was the year that Mel Gibson was slammed for an alleged racist rant, Charlie Sheen had woman troubles, Lindsay Lohan admitted dabbling in drugs and Paris Hilton swore she was a changed woman.

In the immortal words of former baseball manager Yogi Berra this year was "déjà vu all over again" for some celebrities behaving badly.

In 2006, Gibson was charged with misdemeanor drunken driving and it was reported he made anti-Semitic and sexist remarks at the time of his arrest. That same year Sheen was in the midst of a bitter divorce with now ex-wife Denise Richards.

Also that year, Lindsay Lohan told Vanity Fair magazine she had dabbled in cocaine and Paris Hilton swore she was giving up sex for a year after a few high profile romances and lots of pictures of her partying.

Fast forward four years and it seems not much has changed.

This past July, police in Malibu Hills, California, opened the investigation into an alleged domestic violence incident between Gibson and Oksana Grigorieva, the mother of his young daughter. Several explosive audio recordings, purportedly between Grigorieva and Gibson, were released online in which a man could be heard using racial slurs and demeaning sexual insults.

In November, Sheen filed for divorce from his third wife, Brooke Mueller, just days after he was found in a New York hotel room with adult film actress Capri Anderson and taken to the hospital with what his reps said was an allergic reaction to medication.

Much of 2010 saw Lohan in and out of either court or rehab.

In July, she was ordered to serve jail time after a judge declared she had violated her probation and in September the actress tweeted that she had failed a subsequent drug test. "Substance abuse is a disease, which unfortunately doesn't go away over night," Lohan tweeted. "I am working hard to overcome it and am taking positive steps."

And after being caught with cocaine in her purse in August and a resulting plea deal, heiress Paris Hilton reportedly told RadarOnline that she was done with the party scene.

Why is it that the same stars seem to play the same bad scenes over and over in the glaring spotlight of the media? Who's to stop them, said writer and relationship expert Rabbi Shmuley Boteach.

"There are a lot of celebrities whose lives are in crisis and who are having a lot of personal problems," said Boteach who at one point advised Michael Jackson.

"Because they are celebrities, they often don't seek the help that they need because they are around brown-nosers and sycophants who are afraid of being kicked out of the entourage, so they help the celebrity mask the problems."

Boteach makes a distinction between celebs like Lohan, who hurt themselves and those like Gibson who stand accused of harming others. Fame is a drug, he said, that "makes you feel really good about yourself, but it also gives you a sense of entitlement."

"You think you can do almost anything because you are treated like royalty and people are afraid to tell you the truth so you rarely hear the truth," Boteach said. "And even though the tabloids are covering your self-destruction, they are still covering you so you feel good that you are so high in demand."

Even the old adage that "all publicity is good publicity," can wear thin if a star keeps repeating the same bad behavior, said celebrity attorney and branding expert Nick Nanton.

Adoring fans are only willing to forgive so much, Nanton said.

"Everyone for the most part is allowed to make a mistake," he said. "Like they say, fool me once shame on you, fool me twice, shame on me. Once the public starts to feel like they are being fooled or duped, that's when a star is going to have problems with their brand."

"Becoming a celebrity doesn't change who you are, it just puts whoever you are on steroids," said Nanton.

So what are the chances that we will still be talking about the misdeeds of the same stars in 2011? Pretty high, said Boteach, unless they go the way of one well-known personality who Boteach has been counseling.

"Look at how much better Jon Gosselin was this year," Boteach said. "I give him an enormous amount of credit because (in 2009) he was at the center of the tabloid world, behaving with very poor judgment, humiliating himself and embarrassing his family and now he is a man who has gotten his life together and has dropped out of the tabloid light."