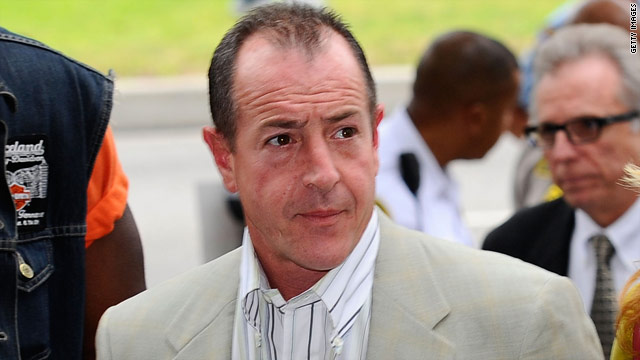 Los Angeles, California (CNN) -- While Lindsay Lohan deals with drug addiction at the Betty Ford Center, the actress is also working through her very public differences with her father, Michael Lohan.

The father and daughter were photographed together during an outing Wednesday.

"We had the greatest time in the world," Michael Lohan said Thursday.

Both Lohan parents have taken part in family therapy with their daughter. Michael Lohan said he hopes his ex-wife, Dina Lohan, will join him in December for family therapy.

"I hope that Dina can get on the same page and put it all to rest by having family therapy together," he said.

His daughter's rehab program is going very well, he said. "I can't say how proud I am of Lindsay," Lohan said.

Lindsay Lohan checked into the Betty Ford Center in Rancho Mirage on September 27, three days after it became clear a judge intended to send her to jail because of a failed drug test. The judge eventually ordered Lohan to stay in the drug rehabilitation program until January 3 instead of going to jail.

If Lohan, 24, violates the rules of her rehab program or fails a drug test before her next court date on February 25, she will be sent to jail for 180 days, Los Angeles Superior Court Judge Elden Fox told her.

Staying clean and sober until then would end Lohan's supervised probation, and she can put "this long episode" behind her, Fox said.

Lohan's legal troubles began when she was arrested twice in 2007 on charges of driving under the influence, and in the second incident she was charged with cocaine possession. The first arrest came after Lohan lost control of her Mercedes-Benz convertible and struck a curb in Beverly Hills. In June of that year, just two weeks after checking out of a Malibu drug and alcohol rehabilitation facility, she was arrested again. after a woman called Santa Monica police, saying Lohan was trying to run her down with a car.

Lohan's acting career, which started at 10 on the soap opera "Another World," took off on the big screen a year later when she played identical twins in Disney's remake of "The Parent Trap."