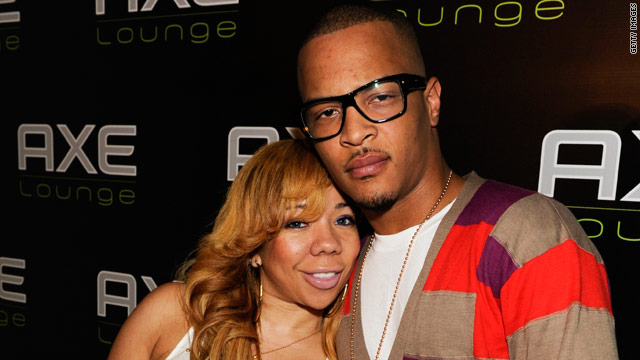 Rapper T.I. and his wife Tiny were arrested two months ago after suspected illegal drugs were found in the couple's car.
STORY HIGHLIGHTS

Los Angeles, California (CNN) -- Rapper T.I. begins serving an 11-month sentence in an Arkansas federal prison Monday, while the drug case against his wife is set for a hearing in a Beverly Hills, California courtroom.

T.I., whose real name is Clifford Harris, was on his way from Atlanta, Georgia, to the Federal Correctional Center in Forrest City, Arkansas, Monday morning, according to his lawyer's office. It's the same prison where the rapper served seven months last year on a federal weapons conviction.

"Tiny" Tameka Cottle's name was on Monday's court calendar for arraignment on a drug charge, according to the judge's clerk, but it was unclear if she would travel from Atlanta to California to attend.

The couple's latest legal troubles began when a Los Angeles County Sheriff's deputy stopped them on Sunset Boulevard in West Hollywood two months ago for a traffic violation. They were arrested after suspected illegal drugs were found.

The district attorney decided last week not to prosecute Harris, 29, but Cottle, 35, was charged with misdemeanor drug offense. She is accused of possessing MDMA, commonly known as ecstasy, according to the court filing.

The rapper's arrest and a failed drug test the next day convinced a federal judge last month to send Harris back to prison for violating his probation on a federal weapons conviction.

Harris was given until Monday, November 1, to begin serving his 11-month sentence.