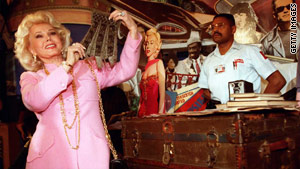 The spokesman for Gabor's daughter Francesca Hilton said the doctor told Hilton the situation was "not life-threatening."

Gabor was hospitalized for several days earlier this month for complications relating to the surgery.

Gabor had returned home from the hospital two weeks ago because she "wants to spend her final days at her home," Blanchette said at the time.

She spent three weeks in the hospital after breaking her hip in a fall from her bed on July 17.

She has been frail and "pretty much confined to a wheelchair" since a 2002 car accident, said Von Anhalt. The crash happened when the car in which she was riding with her hairdresser slammed into a light pole on Sunset Boulevard in Los Angeles.