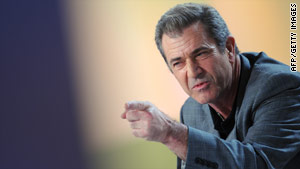 Police in Malibu Hills, California, opened the investigation earlier in July into an alleged domestic violence incident between Gibson and Oksana Grigorieva.

Grigorieva has accused Gibson of striking her in the face, while he alleges that she attempted to extort him to keep controversial recordings of their arguments secret.

Phone calls recorded by Grigorieva are "part of the investigation" into the alleged domestic violence," sheriff's spokesman Steve Whitmore said last month. Several explosive audio recordings, purportedly between Grigorieva and Gibson, were released online in the past month.

Gibson and Grigorieva are involved in a bitter child custody dispute over their 8-month-old daughter.