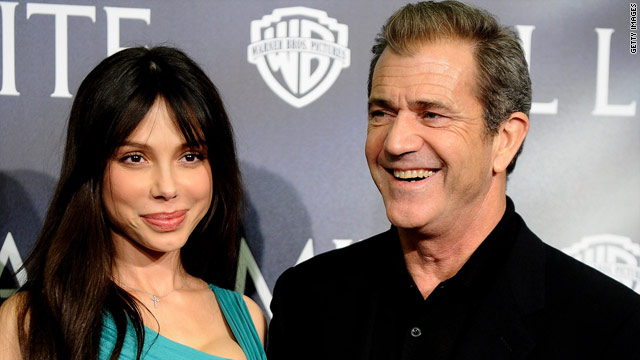 (CNN) -- A new audio recording released online Monday purportedly captures another profanity-laced argument between actor Mel Gibson and former girlfriend Oksana Grigorieva, in which he threatens her life and verbally abuses her.

RadarOnline released the audio on its website Monday -- the second such recording since another tirade was posted Friday. The site claims the male voice is that of the 54-year-old Gibson. CNN has not independently confirmed the authenticity of the recording.

In the audio released Monday, the man on the recording can be heard repeatedly using sexual slurs and profane insults as he grows increasingly enraged throughout the phone conversation.

At one point, the man says, "What, what are you threatening me?" after the woman tells him he is "going to answer" for an alleged physical assault against her in which her teeth were broken.

The man also says of the alleged assault: "You got what you f***ing deserved."

In the recording released Friday, the man launches into a racist, sexist rant against the woman, telling her she looks "like a f***ing b**** on heat and if you get raped by a pack of n***ers it will be your fault."

It's unclear when either audio recording was captured.

Grigorieva, 40, said the female voice on the recordings is hers and that the other voice is Gibson's. CNN's efforts to obtain comment from Gibson have been unsuccessful.

Also Friday, the William Morris Endeavor talent agency confirmed to CNN that Gibson is no longer their client.

Gibson has been caught in a custody dispute with Grigorieva over the couple's 8-month-old daughter.

Last week, the Malibu Hills Police Department opened an investigation into an alleged domestic violence dispute between Gibson and Grigorieva.

Grigorieva filed a restraining order against Gibson alleging that the actor and director struck her in the face, according to her spokesman, Stephen Jaffe.

Police said last week that they are still in the process of gathering information surrounding Grigorieva's allegations.

Grigorieva has spoken with sheriff's deputies and has provided a statement to them in their domestic violence investigation, Jaffe told CNN Friday. The publicist said Grigorieva did not initiate the investigation.

The recordings "will be part of the investigation," Los Angeles County Sheriff spokesman Steve Whitmore said on Monday.

It is not known how RadarOnline obtained the recordings. Jaffe said Friday that the site did not receive them from Grigorieva.

She "absolutely did not provide any tape to the media," he said.