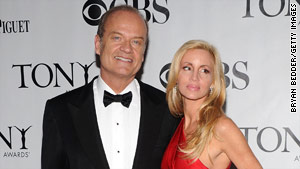 (CNN) -- Kelsey Grammer and his wife of nearly 13 years are divorcing, according to the actor.

A posting Thursday on his official Twitter site said, "Hello everyone thank you for ur support and Yes it's TRUE Camille and I are Divorcing I ask U 2 respect our privacy ..."

"Things fell apart between us. That is all," Grammer said in consecutive Twitter posts Thursday evening. "She is still the mother of my children and any disparagement of her will only hurt the children. Camille did not want this but has made a very difficult decision and I respect her for it."

Calls to Donatacci's attorney were not immediately returned. The couple has two children, and asked for their privacy to be respected in a joint statement issued earlier in the day.

Grammer's marriage to Donatacci was his third. He is best known for his role as psychiatrist "Dr. Frasier Crane" in the NBC hit sitcom "Cheers" and later in the same role in the spinoff "Frasier." He also provided the voice of "Sideshow Bob" on Fox's "The Simpsons." His latest role is Georges in a Broadway production of "La Cage aux Folles."

He has won five Emmys and two Golden Globes among several other awards over the course of his career.