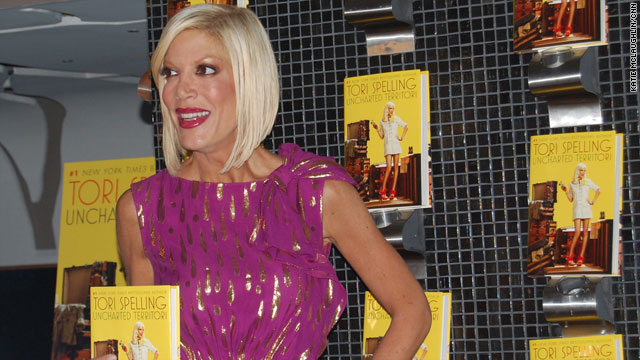 New York (CNN) -- You'd think that Tori Spelling showing up three hours late to her own book release party was the ultimate snub.

But don't judge this tell-all by its cover.

Spelling had spent the last four hours signing autographs at a local Borders store, and insisted on talking with every person in line and posing for snapshots.

An entrepreneur, Spelling wears many (presumably stylish) hats. She and her husband, actor Dean McDermott -- along with the couple's children Liam, 3, and Stella, 2 -- star in their own reality TV show, "Tori & Dean: Home Sweet Hollywood." Spelling also has her own jewelry line, designs children's clothing, and is a working actress, spokeswoman and author.

"The great thing about what I do is I only take on work and businesses that are organic to me and I'm passionate about. It's kind of a blend of my life because at some point, my life became my business, and my business is my life ... which is a hard balance to strike," Spelling said.

In her latest book, "uncharted terriTORI," Spelling tackles eating disorder rumors (she says she had H1N1), the truth about her marriage, her friendships (or lack thereof) with her former "Beverly Hills, 90210" co-stars, motherhood and the thawing of her icy relationship with her own mother.

Spelling was eager to set the record straight about all talk of anorexia. "I address all of my health issues in the book," she told CNN. "And I think it's really irresponsible to label someone with an eating disorder. I pride myself on being an inspiration to women out there, and I want them to have a healthy body image. I have a daughter of my own, so I think they should really do research and get their facts straight."

Regarding her marriage, Spelling says, "Dean and I haven't hid the fact that we've had a rough year." She attributes what she refers to as the couple's "four-year crossroads" to a communications breakdown, differing opinions on parenting and McDermott's opposition to her own self-proclaimed "workaholic tendencies."

In her book, Spelling said she had come to terms with the fact that, like all couples, she and McDermott were in an "ebb" phase, and that things weren't always going to "flow." She wrote: "If someone says they're in a perfect relationship -- they're lying. And I was the girl who went into it wanting the perfect relationship."

Although the internet is rampant with stories about Spelling receiving the silent treatment from the old "90210" gang, she was asked about the possibility of her character, Donna Martin, returning to the small screen on the new "90210." "You know what," Spelling told CNN. "I totally would, but they haven't called me. For the fans, I would."

Spelling, famous among her friends for throwing elaborate parties, is currently shooting a new reality show with the Oxygen network. "We're currently filming 'Tori & Dean: Weddings,' " she says, "which is really amazing because everyone knows I love planning a party, and I specifically love planning a wedding and I'm all about love. Dean and I have been working on our relationship this year and kind of getting back to us. And really, what's better than love and a party? So there you have the perfect wedding. And we have this great, unbelievable opportunity to plan people's dream weddings and kind of navigate young couples through the process of getting married -- what their relationship is now and what they can look forward to and guide them through that."

When asked about the return of "Tori & Dean: Home Sweet Hollywood," which just wrapped up its fourth season, Spelling told CNN, "No official pickup has been announced, but if the fans bring us back, I think there's a very good chance. The fans are worried that this is a replacement, but we plan on doing both shows, so the great thing about that is they'll get two sets of 'Tori & Dean' two times a year instead of one set one time a year."

Spelling's next writing project is a children's book, due in September. "I am really excited about that," she told CNN. "I love writing, it's a passion of mine and I love my kids, and I really wanted to do a children's book. I'm working with my same publishers, Simon and Schuster, and when they told me they wanted to do a children's book, and I was like, 'Yes! I am so in!' So I dedicated this book to Liam and Stella -- it's called 'Presenting ... Tallulah,' and it's about a little girl standing up for who she is and believing in herself."

Spelling also shared an anecdote about Stella: "Her new thing is she sings 'Single Ladies' and she dances to it. No joke, she shakes her hips!" Spelling says the little girl didn't learn it from her. "She watched 'Chipmunks: The Squeakquel'. They do it in that!"