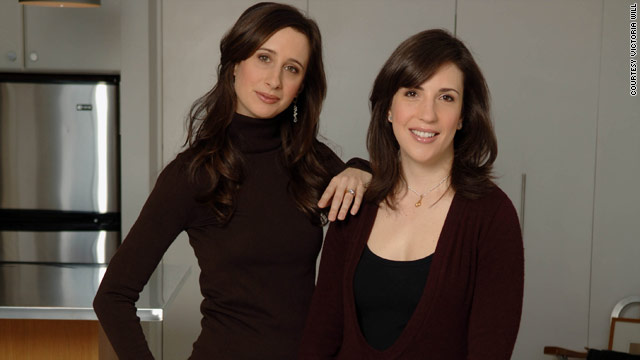 "It was fascinating to us how many articles ran in the New York publications last year about the dysfunction in the childhood of Merkin, Madoff and the other players," Kraus said.

"We were also fascinated by the defense attorney's speech in the sentencing of Marshall and how he opened by saying 'See not before you the man, see the boy, see the child.' That was Grayer."

Grayer X is the overindulged and woefully neglected charge of Nanny in their 2002 blockbuster novel "The Nanny Diaries." The authors revisit those characters' lives in their recently released sequel "Nanny Returns."

The new book is set 12 years later, with Grayer, the troubled teen son of the wealthy Mr. and Mrs. X, reaching out to the now married Nanny to help him and his younger brother, Stilton.

McLaughlin and Kraus are former nannies to the same New York City Upper East Side crowd they skewer in both social satires.

Their first book helped to kick off interest in a slew of other "chick-lit" novels like "The Devil Wears Prada," in which the hired help peel back the curtains on the lives of the wealthy and powerful.

Robert Bennett, an assistant professor of 20th-century American literature at Montana State University, said the popularity of such books began during a much more prosperous time in the country's history and continues partly thanks to the escapism such novels provide.

"There's an element where you have a less privileged character viewing what is going on, which I think draws in the average reader because they say, 'Here's a character I can relate to,' " he said. "It becomes a kind of active class voyeurism."

McLaughlin and Kraus said originally they were just looking to talk about a first job experience and shed some light on "white collar child neglect." They also wanted to give voice to an exploited work force, they said.

" 'The Nanny Diaries' was very much a response to a number of articles that were coming out, at a time when the economy was doing the opposite of what it is doing now, about how hard it was to find good help," McLaughlin said. "The help was never represented in the articles that we read.

"And also there were children at stake and that was the other 50 percent of what was compelling us to write. This wasn't just about a bad job."

Those children, they said, go on to positions of power and often are making decisions from a corporate level that have an effect on us all. So they felt it was important to address how the children's values may have been shaped.

The writers said they were often approached to produce a sequel to their hit novel -- which spurred a 2007 film starring Scarlett Johansson -- but were resistant, believing they had nothing more to add.

In 2008, they began to have the vision of Grayer coming back to confront Nanny about the stinging videotape she left for his parents at the end of the last book.

They also wanted to revisit, they said, "this community that had chosen money over love and suddenly had nothing" as the economy spiraled down.

Having written together for 10 years ("Nanny Returns" is their fifth book) they believe that readers still have a fascination with how the other half lives.

"The books that are about glorifying that mindless consumption, perhaps the appetite for those has waned," Kraus said. "But I think any opportunity to say to America that adding more money into the scenario doesn't fix it and doesn't automatically make for a happy family, I think people would take comfort in that."

The pair bring their own family perspectives to their new novel. In the years since they gained fame, they both have, like Nanny, married, and Kraus is expecting a child any day.