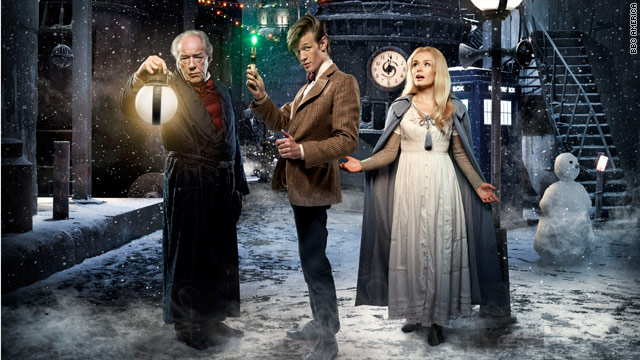 Doctor Who, played by Matt Smith, center, meets some people in need of Christmas cheer on a distant planet.
STORY HIGHLIGHTS
RELATED TOPICS

American fans of the British sci-fi show, "Doctor Who," are about to get a great Christmas present.

This year, for the first time ever, BBC America is airing the "Doctor Who" Christmas special at 9 p.m. ET on Christmas Day -- the same day BBC airs the special in the UK.

Since 2005, American fans of the franchise had to wait days, even weeks to see re-broadcasts of episodes and special events, first on Sci Fi Channel (now Syfy) and now on BBC America. Bloggers immediately assumed this unprecedented programming was an attempt to stamp out fan-related internet piracy.

"We're not waiting for it to air over here, we're watching it online. We're downloading it ahead of time. And not only that, we're watching the unedited versions. It wasn't until recently that (BBC America) started to ... air them unedited for time," said Aaron Cistrelli, president of the "Doctor Who" fan-club Time Meddlers of Los Angeles, based in Southern California, which has been around for 20 years.

All that downloading "means (American fans) love the shows so much they can't wait to see them," Richard de Croce, senior vice president of programming at BBC America said.

"And that's the world we live in, in terms of technology, quite honestly. So let's air these shows as quickly as we can post the UK's transmission," he said.

And plans are in the works for season six of "Doctor Who" to be broadcast the same day in the United States as well, said de Croce.

The Christmas special has been an extra fix of the show which airs in the spring. By winter, fans haven't seen any new adventures for a few months.

In the UK, the Christmas specials of the last few years have reached "event" proportions. Whole families stay home on Christmas Day to watch the show.

"The one with David Tennant and Kylie Minogue in it I think was one of the highest viewed, non-sport television programs of the decade," said Steve Pugh of VisitLondon.com, and a "Docor Who" fan since age 7.

"I can honestly say I think it's the 'Christmasiest' Christmas special that 'Doctor Who' has ever done," said Piers Wenger, executive producer of the show along with Steven Moffat.

The audience for "Doctor Who" in the UK is much broader than the American audience. Wenger points out that the show is actually quite popular with children in Britain, even airing at 7 p.m. there as opposed to a more adult 9 p.m. in the United States.

While Anglophiles and sci-fi fans in the United States are generally aware of the show, which has a thriving cult following, it is still far from mainstream. But the show gets a friendly reception for being so "fringe."

CBS late night talk show host Craig Ferguson -- who grew up watching "Doctor Who" in Scotland -- filmed an extravagant opening segment set to the "Doctor Who" theme song, on the night that he interviewed Smith. CBS didn't air the segment, but it went viral on the internet.

"I spent time with the cast in New York and Los Angeles," during a press tour for the show, Wenger said. "And they were completely overwhelmed that people recognized them. They didn't expect that at all. I think American fans are every bit as passionate about our show as their British counterparts are."

Americans have known about this British import since the 1970s when episodes of "Doctor Who" were aired on PBS. The show is nearly 50 years old. It premiered in Britain in 1963 and ran until 1996, with eight actors playing the title role.

The show returned in 2005 with Christopher Eccleston as Doctor Who and continued with David Tennant and now Matt Smith, the 11th actor to play the Doctor.

Many fans have a strong allegiance to a particular Doctor. Tom Baker, Doctor Who from 1974 until 1981, is often sited as a favorite -- well-loved for his quirky performance, Afro hairstyle and multi-colored scarf.

Smith's Doctor has also met with warm regard from fans.

"My favorite Doctor is Matt," Wenger said. "I think that he is just incredibly gifted and able to steer the action from a moment of real high drama and kind of vitriol to a moment of brilliant physical comedy and I think that's why the show is in so many people's hearts."

"I think I'm not alone in saying he's my favorite Doctor."