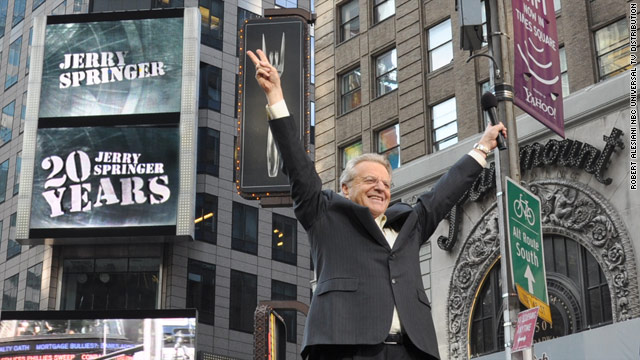 (CNN) -- Jerry Springer doesn't mind being referred to as the "grandfather of trash TV."

"Yeah, it's probably accurate," he said. "I don't know what the award for that is, but I think it is true that we were probably one of the first shows to present some of the outrageousness we have."

As "The Jerry Springer Show" celebrates its 20th anniversary on the air, it occupies a part of the realm of pop culture that has moved well beyond tossing of chairs and attacking cheating spouses. These days reality shows have replaced talk shows as theaters of the outrageous, which was not the case when Springer's show debuted.

So can we blame Jerry Springer for "Jersey Shore"?

"I think it's a bit of a misnomer that Jerry Springer started the reality TV craze and can be blamed for it," she said. "There are many similarities, but it's not what people instantly think of."

The similarities, she said, are in tone and the "behind the scenes manipulation of what you are seeing on screen."

"You can't blame a talk show for an entirely different genre that has a similar tone," Pozner said. "What you can say is that Jerry Springer was often accused of setting up guests, having actors pose as real people and that sort of thing in an attempt to convince the Springer audience that what they were seeing were real people acting in crazy and buffoonish ways and that is similar to reality TV."

Whether real or not, Springer's show has been embraced by fans over the years even though he said it was never expected to last this long.

"My first contract was for six weeks," he said. "It was just a side job. I had been anchoring the news for the NBC affiliate in Cincinnati [Ohio] for 10 years. The company that owned the affiliate also owned talk shows like Phil Donahue, Sally Jessy Raphael, etc."

Springer, 66, said that as Donahue was getting close to retirement, Springer was asked to helm a talk show. He would fly to Chicago, Illinois, in the morning to tape the talk show and then back to Cincinnati to anchor the news every evening at 5:30 p.m., 6 p.m. and 11 p.m., five days a week.

That got old pretty quickly, he said, and within two years he had quit his anchor gig. Springer said the first show was pretty tame -- it focused on reuniting a family -- and remained so for a few seasons.

Years later he approached producers with the idea to try to compete with "The Ricki Lake Show" rather than "The Oprah Winfrey Show" by catering to a younger audience.

"The fact of the matter is young people are much wilder and open about their lives," he said. "So the show started to go a little crazy."

The show has since become iconic, with Springer appearing on the cover of "Rolling Stone" and on "The Simpsons."

Springer said that after Universal bought the company that owned his show in 1997, it was decreed that they were only allowed to air episodes involving story lines "that are outside approved human behavior."

His show, he said, was one of the first that didn't just focus on middle-class whites and he rejects the notion that his show has contributed to the "dumbing down of America" and contributing to the disintegration of society.

"Certainly much of television is not about high intellect," Springer said. "In terms of it contributing, that's an absurdity. Some of the worst things we ever had happen happened before we even had television."

"We had a Holocaust and I don't think anyone was watching television at the time."

"I think [the show is] silly, crazy and has no redeeming social value other than an hour of escapism," Springer said. "There is never anything on our show that hasn't been on the front pages of newspapers in America. The only difference is that the people on my show aren't famous."

"It's a show about craziness," he added. "I know that going in every day."

"The fact of the matter is there are millions of people tuning in and watching the show," Halpern said. "If people didn't want to see this stuff, these shows wouldn't exist."

But at least one person isn't tuning in.

With his talk show, a gig as the host of the Game Show Network's "Baggage" and traveling with the live tour of "America's Got Talent," Springer reserves his boob tube time for his personal interests.

"If I'm watching television, it's either sports or politics," said the man who once served as mayor of Cincinnati. "I'm addicted to the cable news networks."