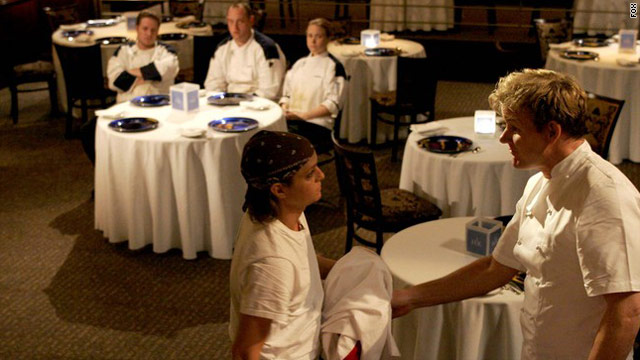 Rachel Brown, left, is shown being eliminated by Gordon Ramsay on "Hell's Kitchen" in 2006. She committed suicide in 2007.
STORY HIGHLIGHTS
RELATED TOPICS

(CNN) -- Which came first, the troubles or the fame?

After the suicide of a former contestant on Gordon Ramsay's "Kitchen Nightmares," the spotlight has once again shone bright on the issues of reality TV stars.

At the time the episode was taped in 2007, Cerniglia was facing financial issues stemming from his then-struggling restaurant. Ramsay offered advice on how to turn his business around, telling the chef, "Your business is about to f**king swim down the Hudson."

On Tuesday, the chef released a statement regarding Cerniglia's death.

"I was fortunate to spend time with Joe during the first season of 'Kitchen Nightmares,' " Ramsay said in the statement. "Joe was a brilliant chef, and our thoughts go out to his family, friends and staff."

Cerniglia's death once again raised the specter of suicide in connection with reality television.

"I absolutely don't feel that everyone who appears on a reality show is a damaged person," said Sharon Waxman, founder of entertainment site The Wrap, which last year examined the suicides of 11 people connected to reality shows. "I'm just saying that there's probably a higher percentage than in the normal population who are attracted to that and who might have some vulnerabilities that will be exploited by being on television."

There have been several cases, including Najai Turpin, a boxer who killed himself in 2005 after participating in the reality show "The Contender" hosted by Sylvester Stallone and Sugar Ray Leonard.

In 2008, a one-time "American Idol" auditioner, Paula Goodspeed, was found dead of an overdose near the home of one of the show's judges, Paula Abdul. Abdul later said that Goodspeed had been obsessed with her for several years and that she had begged producers not to allow Goodspeed to audition.

The Fox network declined to comment on Goodspeed's death, but then-former "Idol" producer Nigel Lythgoe told People magazine he had no recollection of Abdul requesting that Goodspeed not be allowed on the show.

Rachel Brown, a 2006 contestant on "Hell's Kitchen," which is also hosted by Ramsay, was found dead of a gunshot wound in her Dallas, Texas, home in 2007. A representative of the Tarrant County medical examiner's office confirmed to CNN that Brown's death was ruled a suicide.

Princess Banton-Lofters is a development producer who has worked on casting several reality shows, including "The Real Housewives of Atlanta." She said she has seen the process morph over the years.

"I know that when I am casting, I am looking for that person who is going to shine," Banton-Lofters said. "That could be shining in personality, shining in lifestyle or shining in just their story. But I think it's definitely changed in that [casting professionals] are probably now looking for a little bit more of the crazy."

But with so many people these days pursing the limelight via reality shows, is the amount of troubled contestants just an expected statistic?

Celebrity and fame expert Cooper Lawrence said that may be, though she pointed to a 2006 study authored by Dr. Drew Pinsky (host of "Celebrity Rehab" and "Sober House") and S. Mark Young published in the Journal of Research in Personality as evidence that reality television attracts a specific type of personality.

In the study, celebrities including television stars, comedians, musicians and reality stars were given the Narcissistic Personality Inventory.

"The numbers for the reality stars were off the charts," said Lawrence. "It makes sense because you are not an actor playing a role, you're not a musician hiding behind a guitar, you're you. The level of narcissism for reality stars is documented and goes well beyond the normal population."

And while narcissism isn't an indicator for suicide, Cooper said it can be an indicator of a troubled person who lacks the stability to deal with the dark side of notoriety. "Reality television has provided an outlet for narcissistic individuals, many with limited abilities, to believe that they can succeed in the entertainment industry," the study said. "This desire to enter the industry may be fueled by the types of fantasy feelings of success, power and glory that narcissists seem to exhibit."

Dr. Paula Clayton, medical director for the American Foundation for Suicide Prevention, said that there is no data that definitively links reality television with an increased probability of suicide, but that a mental disorder like narcissism could make a person more prone to taking his own life.

"Ninety percent of people who kill themselves have a mental disorder when they kill themselves, the most common one being depression," she said. "There are all of these background factors that are the most important, and these reality shows and whatever happens might be the final straw."

The Wrap's Waxman said their series on reality show suicides sought to examine whether the sometimes brutal nature of appearing on reality shows with all that entails, including public scrutiny, was a cause or if such shows simply attract troubled individuals.

Waxman said the debate rages on.

"I think the experts will tell you that both are factors," she said. "To some degree, there are people who are needy in some way who are looking for fame for some particular reason to fill some need that they have which makes them particularly vulnerable."

"But also the experience of being on television exposed in that way and often seeing themselves on television being 'Franken-edited' or what they call 'Franken-bytes,' where they edit a sequence together just to heighten the drama of every scene, is sometimes really mortifying for people, and they're really not prepared for that."

Blogger Kath Skerry, who runs GiveMeMyRemote.com, said she worries that those who are focused on the fame that reality TV brings may not be mentally or emotionally prepared for the downside.

"If you fail on reality TV, you're failing in a very big way," she said. "In a way that is seen by millions and millions of people and to have that level of vulnerability exposed can raise the dramatic stakes of your situation."