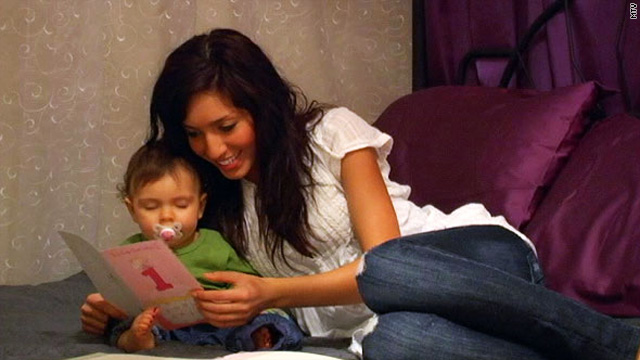 (CNN) -- "Teen Mom" is not only a spin-off, but the show is also spinning off its own success.

The docu-show about young single mothers has become the third most-watched original cable series of the season, helping MTV achieve its best summer ratings in three years, according to TV by the Numbers.

In its second season, the show, which originally premiered in December 2009 as a spin-off of MTV's "16 and Pregnant," is sharing its success with other mediums.

The moms of "Teen Mom" made their newsstand debut on the cover of Us Weekly's August 30 issue. The magazine called out to prospective readers with "Inside their struggle," written in big yellow lettering atop a photo of Farrah Abraham, Maci Bookout and their babies.

"A lot of editors here at the magazine watch the show," said Lara Cohen, a news director at Us Weekly. "It's compelling. We'd been pushing to do stuff in the magazine and then we saw how well it was doing ratings-wise over the summer. We decided to take a gamble on it as a cover because we liked it so much."

"We were floored by how well [the issue] did on the newsstand for us," Cohen said. "It was one of our biggest sales of the summer." Though Cohen wasn't able to discuss specific figures, she said sales were similar to the issues featuring "Bachelor" scandals.

OK! and People Magazine, who were not available for comment, have since also hopped on the "Teen Mom" bandwagon.

"It's a competitive market right now," Cohen said. "If something is working for one of us ... other magazines will knock it off."

But not everyone is happy about the covers or the show's popularity.

Jenna Hatfield, a freelance writer, expressed her discontent with the series in a blog she wrote for BlogHer.

"I kept ['Teen Mom'] off my radar for a while, just because I didn't think '16 and Pregnant' was handled as well as it should have been," Hatfield said. "But it was forced back onto my radar because I saw all the tabloids at the grocery store, and I was like, 'what is going on?' "

Hatfield, whose mother was a teen mom, said her problem with the show is that, "These particular teen moms aren't experiencing the same reality as the teen mom down the street."

While she may not love the show, Hatfield said she's not surprised the magazines sell like they do and added that whether viewers are fans of the show or not, they might still be intrigued to know what happens.

Even one of the world's most famous entertainment bloggers has taken issue with the show's high-profile coverage.

"Note to the magazines: Try harder!"Perez Hilton posted on his site September 1. "Is this 'Teen Mom' shiz all they have?" The next Wednesday, as a new slew of weeklies made their way to the public, he posed, "Why do these 'Teen Moms' keep getting magazine covers?"

"There's an ebb and flow between reality stars being the big stars and the A-listers being the big stars," she said. "This summer, there hasn't been a big A-list storyline -- no Brad and Angelina. ... The reality stars are like low-hanging fruit -- both for us to cover them and for people to be investing in them because they're putting their lives on TV right in front of you."

Bondie, a personal blogger who has written about "Teen Mom," said readers should take it for what it is.

"They have to go out there and get press for their show," she said. "They're just trying to make money, as any other mom is."

After all, those paychecks from reality TV help buy diapers, Bondie noted.

"The girls they chose to put on the show get a really strong reaction from the viewership," she said. "People buy the magazines because they're truly invested in the girls now. They want to see how things play out."