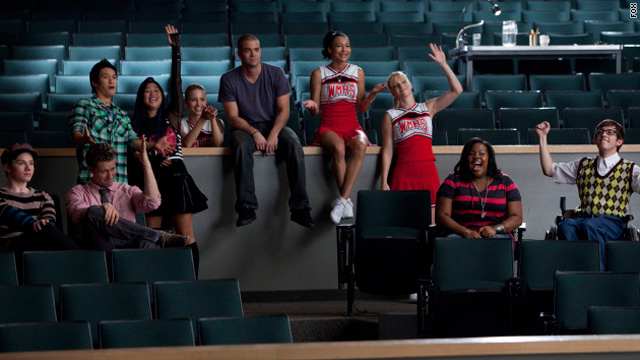 (Rolling Stone) -- In its first season, "Glee" featured some weirdly eclectic song choices: Remember "Thong Song" and "Sweet Caroline" in the "Mash-Up" episode? But in the season-two premiere on September 21, the show will outdo itself.

Rolling Stone has learned that the first episode will feature renditions of Jay-Z's "Empire State of Mind," Lady Gaga's "Telephone," Travie McCoy's "Billionaire," and Poison's "Every Rose Has Its Thorn." In true Gleek fashion, the cast will also perform two vintage Broadway musical standards -- "What I Did for Love" from A Chorus Line and "Getting to Know You" from The King and I -- as well as "Listen" from the film version of "Dreamgirls."

According to the series' music supervisor, P.J. Bloom, the episode's plot paved the way for the Jay-Z track: Having placed at the Regional competition in last season's finale, New Directions will travel to New York for the Nationals. "So we needed a New York song," explains Bloom. He also says that the use of a second Gaga song -- after "Bad Romance" in the previous season -- is all due to co-creator Ryan Murphy. "Ryan's a huge Lady Gaga fan," Bloom says. "I suspect we're going to continue to look to her to be part of the show."

TV on the Cover of Rolling Stone

The following week will see the premiere of the show's all-Britney Spears episode, which will include performances of five Spears songs -- although for now, no one's saying which ones. Bloom is also promising an "additional recording" for the episode, but is mum on details. (We're already picturing Spears and Matthew Morrison doing a Britney-and-Justin-style duet, but maybe that's just us.)

In other "Glee" music news: Another soundtrack album could arrive as early as October, and Morrison is wrapping up his solo debut, due on Mercury Records early in 2011.