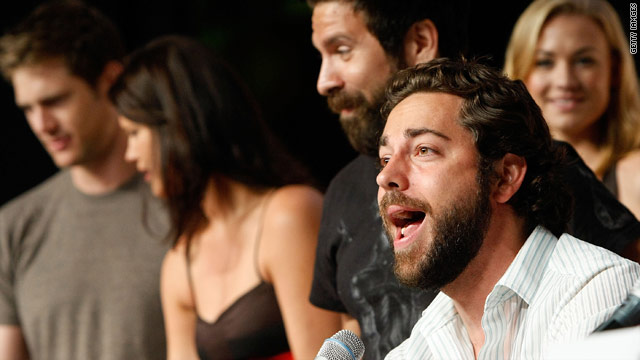 The cast of "Chuck" announced some major casting news at this year's Comic-Con in San Diego, Callifornia.
STORY HIGHLIGHTS

San Diego, California (CNN) -- Launching a show at San Diego Comic-Con can be a risky business, but sometimes it pays off. "Lost," "Heroes" and "Glee" all went on to spectacular first seasons after panels at Comic-Con.

AMC's "The Walking Dead" seems like it might benefit the most from Comic-Con, with an audience that already knows the show's title from the comic book on which it's based.

An extremely creepy display promoting the series, with two bloody bodies and words scrawled on a wall in blood, greeted many Con-goers on the floor. This is the network's way of letting fans know that they don't intend to hold back on the violence and gore.

It's just one example of how this year, more than ever, the networks are hoping to build buzz around their new shows, as well as keep or grow the audience for established ones. To do that, they try to give the fans what they want.

"I think fans want to meet the cast and creators, and they want a bit of inside information," said Lisa Gregorian, chief marketing officer of Warner Bros. Television (which is owned by Time Warner, owner of CNN). "All fans are looking for a unique, fun experience with the shows they love."

Warner certainly made its presence known, with free bags promoting many of their shows handed out to fans as they registered.

Video: 'Halloween in July' at Comic-Con

Shows such as "Eureka" and "Burn Notice" were being promoted in a variety of ways outside the convention, including a takeover of a nearby restaurant.

Showtime plastered ads all over buses in San Diego.

Inside, it held a panel for four of its shows, including "Dexter," which is extremely popular at Comic-Con.

One thing that can't miss at Comic-Con is free food, and Fox served up free burgers and soda on behalf of the upcoming animated series "Bob's Burgers."

Then there's the low-key approach; of course, low-key at Comic-Con means driving through town with a bullhorn. HBO did this to promote the return of "Eastbound and Down."

"No Ordinary Family," about a family given superhero powers, gave attendees the chance to "lift" a car themselves. Stars Julie Benz and Michael Chiklis showed the pilot as well, and Benz talked to the media about this change in tone after the extremely dark "Dexter."

"For me, it's just the perfect marriage of genres, and I'm ready to explore more of the lighter side," she said.

Chiklis, with his background as The Thing in the "Fantastic Four" movies, was asked about playing another superhero.

"I just think it's a huge genre, there's so much room to grow. Just look at Comic-Con, it's like Vegas," he said. "I'm happy to do a show that blends genres."

Of course, there are shows that are already perennial favorites at the convention, such as "True Blood," which had ads plastered all over the convention center. And there's "Chuck," which once again wowed the fans with the fictional band from the show, Jeffster, doing a music video of Lady Gaga's "Bad Romance."

The crowd also cheered at the announcement that Linda Hamilton would be playing Chuck's mother.

Stars Zachary Levi and Joshua Gomez were in rare form talking to the media. They riffed on the power of the internet to keep "Chuck" on the air and the upcoming season. Levi said that much of what was said at the panel was a surprise to him.

" 'Old Spice Guy' as a guest star? News to me," he said. Nicole Richie who guest-starred in season one, will also reprise her character.

Now that Chuck's best friend, sister and brother-in-law are in on his spy secrets, what about Jeffster?

"I kind of like that we kind of operate around the spy world, inadvertent," said Vik Sahay, who plays the Lester half of the duo. "I'd like to see more of us accidentally helping out."

One show with something to prove was NBC's "The Event," which showed the pilot to an audience that came away seeming fairly impressed. Of course, even the meaning of the show's title still remains a mystery.

The producers and cast weren't able to provide many more clues, aside from what was presented in the pilot, which involves (spoiler alert!) some mysterious detainees trying to win their freedom and a shocking ending.

"That moment at the end, I was like, 'what the heck was going on?' " said actor Ian Anthony Dale. "I just wanted the chance to read for it, and it was a dream come true."

The mystery continues to build around the show, but the biggest mystery of all may be whether this show, like the other new offerings for the season, will catch on.

If so, they can look forward to a triumphant return like "Chuck" and "True Blood."

We're rallying iReporters at Comic-Con to get the story from the inside out and giving away limited-edition iReport Flip MinoHD video cameras!
The rules for Con costumes

Are you a beginner to Comic-Con? Learn the rules for all the cosplay you'll see and find out the backstory to all those colorful costumes.
Studios build early buzz at Comic-Con

San Diego's convention for comic book fans has evolved into a mammoth, sold-out event where hard-core fans can get early peeks at their favorite movies.
Comic-Con too 'mainstream'?

Some fans say Comic-Con -- the holy four-day weekend for geek culture -- has gone too mainstream. Others see nothing wrong with the trend.
Geek culture news