By Jessica Wakeman, The Frisky 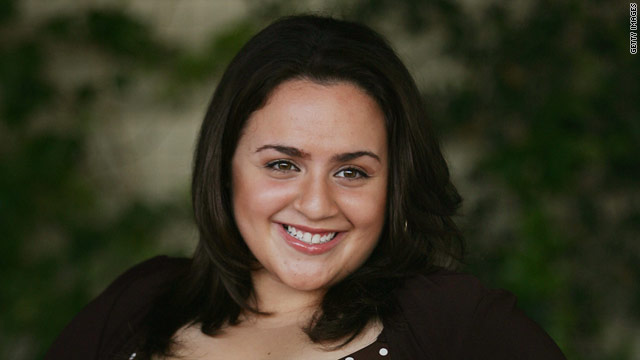 (The Frisky) -- Missing Nikki Blonsky from your life after the 2007 remake of "Hairspray?" Have no fear, she's back again -- not in a John Waters musical this time, but on "Huge," a new TV series about plus-size teens at a weight loss camp.

"Huge" stars Blonsky, 21, as a girl sent to the camp by parents who want her to drop some pounds, which is not in her plans at all. Blonsky stars alongside Hayley Hasselhoff -- yes, The Hoff's daughter -- who is totally gung-ho about losing weight because she's convinced her life will be awesome if she's skinny and hot.

Most of the cast members are plus-size actors and actresses. "I don't think there's ever been a full cast of plus size people before," says Blonsky.

You better believe I'll be parked in front of the boob tube when "Huge" debuts on Monday, June 28 on ABC Family at 9 p.m. EST. Nikki Blonsky talked to me recently about being a plus-size actress, her dream to sing on "Glee," and even dished on her pal, Zac Efron:

Tell me about your character on "Huge."
I play a character called Wilhelmina Rader, but she prefers to go by Will. She's totally against the grain: she has blue hair, she wears all boys' clothes, she's against authority, she doesn't like to be told what to do. It's her way or the highway -- and that's what I love about her.

She's so certain, so sure of herself, and it's really cool to play a character like that. She also keeps a lot of her emotions on the inside. She's not a very emotional person, where she'll tell you how she's feeling. She'd rather do something big to express her feelings than tell you.

The Frisky: Amanda Bynes is retiring at age 24! Other young starlets we'd like to see throw in the towel

She sounds like a total 180-degree turn from the character you played in "Hairspray," Tracy Turnblad. Tracy was so happy and bubbly!
Yeah, she's totally different. Tracy's on one end, Will's on one end. They're both on great ends but they're totally different. Will is way edgier than Tracy and I love playing that different and contrasting character.

I think [Will] will definitely be relatable to a lot of kids out there because a lot of kids are trying to find themselves and they go through dying their hair crazy colors, trying different things to find out who they are.

So, "Huge" is set at a weight-loss camp?
Correct. All the campers go there for a different reason. Some kids want to go there because they really want to lose weight. My character goes because she's forced to go.

Her parents are weight-loss gurus and they make her go because they want her to look like them. She is just, like, "No way is this happening. If I'm going to go to this weight-loss camp, I'm going to do it my way and I'm going to gain weight." She doesn't want to conform and lose weight like everybody else.

In "Hairspray" your character was plus-size and in "Huge" your character is plus-size, too. As an actress, do you get offered scripts that aren't plus-size roles?
The experience for me has been that it doesn't really matter if I'm plus-size or not. It's just been really interesting characters that people either want me to play or think I can play. I've been really fortunate that people haven't put me in a box and said, "Oh, you're just going to play the plus-size girl."

My new movie, "Waiting For Forever," that's coming into theaters in the fall, I play a young mom [who's] married. That script wasn't for a plus-size girl. It was just for a very caring person who could play a mom and they thought I was a good match.

Will your singing and dancing talents come out in "Huge"?
(Pause) Yes.

Can you tell me more?
I can't really elaborate exactly how, but you will hear me sing a little something first season.

Did you audition for "Glee"?
(Laughs) You're asking me all the things we can't talk about!

The Frisky: Insanity on "Real Housewives of New Jersey" -- have they gone too far?

You were cast in "Hairspray" when you were 17 and you're 21 now. Are college or acting classes on the horizon for you?
Neither! I'm just working! (laughs) I'm fortunate enough to be working and every day is filled with going to a job and filming "Huge."

I'm really, really thankful that I have a job and people hired me. I really love this character because there's so many different vulnerabilities in her that my fans have never seen me play before. I think it's going to be amazing.

"Huge" is groundbreaking because it has never been done before. I don't think there's ever been a full cast of plus-size people before. Now there is and kids can tune in and say, "Hey, those people look like me and they're going through the same issues I'm going through."

In this show, we don't just deal with, "Oh, let's go jogging and swim 20 laps and lose 30 pounds." It's not about that. I mean, eventually as you watch the show, you're going to forget it's about a weight-loss camp. You're just going to get so invested in the characters. We deal with everything from eating disorders to body issues to sexual orientation to everything that every teenager is going through right now.

The Frisky: Does a racy, fictionalized version of Anne Frank's diary go too far?

How will "Huge" deal with sexual orientation?
My character, because she wears all boys' clothes, is called "gay." She goes through this whole episode of asking her friend, "Do I seem gay to you?"

It never even crossed her mind that because she wore boys' clothes -- they were just comfortable to her! -- she didn't think that it would have anything to do with her sexual preference. But then [being called gay] led her to question herself. That was really cool to play, somebody questioning their sexuality based on what they wear.

There's been some chatter on blogs about the fact that everyone on "Huge" in plus-sized. From my point of view, as a blogger, I see people wondering if the show is going to stereotype women of size. How, as someone on the show, do you make sure you're not perpetuating stereotypes?
The thing is, everybody forgets plus-size people are just people. We're people!

Every single issue skinny people go through, plus-size people go through, too. We're all human beings and we have to remember that our looks are something that are only with us for a certain time. It's our spirit that people will remember us for as time goes on and we grow older.

The Frisky: Do you remember your first kiss as well as these 10 celebs?

They're not going to really even be noticing that we're plus-size, other than the fact we look more like your neighbors or the people you go to school with, rather than the fake facades of what Hollywood has said everybody should look like.

Nobody really looks like that, unless you have the means. Most of America doesn't have the money to have a trainer 24/7 and a meal service to bring you meals, because if they did, we'd all be a size 2. And that would just be too perfect.

I think this show, you're really going to see the heart of America. I think that's what TV is lacking and I'm so glad we're going to fill that void.

Well said! So I want to know, do you still keep in touch with your "Hairspray" co-stars?
Absolutely. I'm so excited right now for John Travolta. His wife, Kelly, is expecting and I couldn't be more happy for them. They so deserve another beautiful child and I love them so much and I wish them the best.

I keep in touch with mostly all of my "Hairspray" co-stars. I just spoke to Zac [Efron] recently. Now that I'm out in California, I have access to them a lot more.

The Frisky: Kate Gosselin seeks her bodyguard's approval before getting breast implants?

Anything else you want to add?
Yeah, my new movie, "Waiting For Forever," will be coming out in the fall, theatrical release. It's with Rachel Bilson, Blythe Danner and Richard Jenkins. It's a drama. Straight drama. I play a wife and a mom. Totally different from "Huge!"

Well, I'm so happy for you that your career is continuing to take off!
Thank you!