Gary Coleman's living will called for 15 days of life support 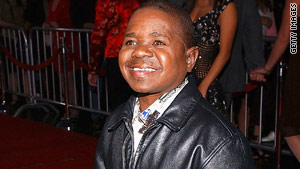 (CNN) -- Gary Coleman's living will called for the actor to be kept alive unless he was in an irreversible coma for at least 15 days, according to a court document.

Coleman's ex-wife Shannon Price ordered his doctor to disconnect life support just a day after he fell into a coma last month, according to the Utah Valley Regional Medical center.

"Decisions to terminate life support for patients are not made by physicians," a spokeswoman for the hospital said Monday. "They are made by family members or legal representatives of patients in consultation with health care providers."

Coleman's "advanced medical directive" signed in October 2006 named Price, 24, as his agent to make medical decisions for him.

"If I am unable to give informed consent to medical treatment, I want my agent to give or withhold such consent for me based upon any treatment choices that I have expressed while competent, whether under this Power of Attorney or otherwise," the living will said. "If my agent cannot determine the treatment choice I would make under the particular circumstances, then my agent should make the choice based on what my agent believes to be in my best interest."

The document, which was attached to a petition Price filed in probate court, included guidelines Coleman wanted followed.

Life support should be ended, he said, after two doctors decided "my condition is incurable, terminal and expected to result in my death within 12 months" or if doctors "have diagnosed that I have been in a coma for at least 15 days and that the coma is irreversible, meaning that there is no reasonable possibility of my ever regaining consciousness."

A spokesman for the Utah Medical Association said a family member's wishes have more weight than what's written in a living will.

"It's not going to trump a family member that comes in and says 'I want you to do something different than what's here in the advance directive,'" said Mark Fotheringham.

Living wills are only involved when a patient is already going to die, Fotheringham said. "It's soley a question of how fast or what care is going to be given in the interim between then and the time of death," he said.

Coleman's remains are at a Utah mortuary, awaiting direction from Utah District Judge James Taylor as to who can decide what happens to the body.

Coleman's former manager Dion Mial, who had been named special administrator, withdrew from the legal battle Monday after a will written in 2005 surfaced, Mial attorney Kent Alderman said. A 1999 will named Mial as executor.

"Based upon the most recently proffered will, it doesn't look like we have a dog in this fight," Alderman said.

Mial's withdrawal left Price and Anna Gray, a Coleman friend, as the only parties contesting for control of the estate.

Gray, a Portland, Oregon, resident, was named by Coleman as executor in the 2005 will, according to a petition filed by Gray.

Price filed a handwritten 2007 will along with her claim that she was still legally married to Coleman as his common law wife, despite the divorce.

"Notwithstanding the divorce decree, Price and the decedent continued to have a romantic relationship and engaged in romantic and sexual relations," the petition said.