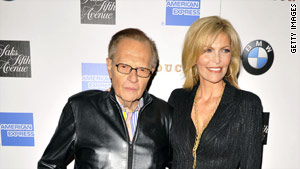 Larry and Shawn King reconciled and dropped their divorce petitions, according to a Utah police report.
STORY HIGHLIGHTS
RELATED TOPICS

(CNN) -- The wife of CNN talk-show host Larry King suffered an apparent drug overdose last month, just over two weeks after the couple reconciled and dropped their divorce petitions, according to a Utah police report.

Paramedics found "multiple pill bottles all of which were empty" on her bed, along with a letter a police officer said "led me to believe that (Shawn) King had intentionally taken the quantity of pills."

Larry King released a statement through his publicist Wednesday saying his marriage is "still together."

"We shall go through this difficult time intact as a family," King said.

Her father, Karl Engemann, called for an ambulance to come to his Provo, Utah, home around midday on May 28 because he found Shawn King, 50, unconscious on a bed.

CNN obtained the recording of the 911 call from the Provo Police Department.

"I've tried to wake her up," Engemann told the emergency dispatcher. "I slap her and I holler at her and she opens her eyes halfway and puts them back down again."

Asked if it could be an intentional overdose, Engemann said "No, no, no, it wouldn't be suicidal."

"I don't think she did it on purpose or anything, but she may have overmedicated," he said. "Last night she seemed confused about what she had taken the last time she had taken it."

He said his daughter did take "something to help with her anxiety and her depression."

The police report obtained by CNN said three handwritten pages were found on the bed near her "indicating that she was leaving, or that she might hurt herself, such as that she wished to be buried in Utah."

"At this time it is unknown whose writing this letter was in, however, wording on the letter led me to believe that King had intentionally taken the quantity of pills," Officer Martin Webb wrote in his report.

"Multiple pill bottles all of which were empty" were found on the bed with the letters, he said. The prescription medications included Compro, Prometrium, clonazepam, Ambien, Klonopin, Subutex, Cymbalta and Lyrica, the report said.

King was taken to Utah Valley Regional Medical Center, where she was listed in critical condition later that night, the report said.

CNN was unable to reach representatives of Shawn King or her father.

Larry King, however, did provide a statement.

"I am extremely supportive of Shawn," he said. "Reports that we have fought are absolutely false. I love her dearly."

The couple filed for divorce within minutes of each other in Los Angeles County Superior Court in April. They announced their reconciliation a month later.

"We love our children, we love each other, we love being a family," their joint statement said. "That is all that matters to us. We owe it to ourselves and our children to continue being dedicated to each other."