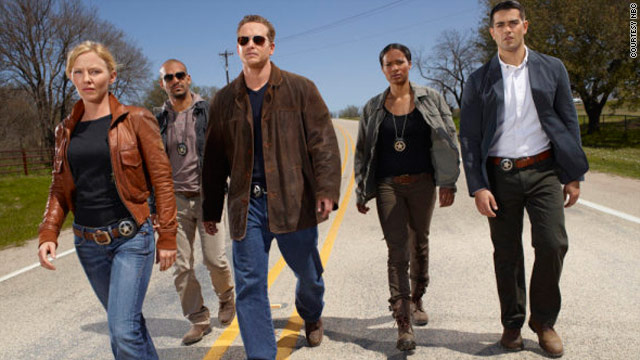 "Chase" will be a new drama taking on the coveted 10 p.m. slot on NBC.
STORY HIGHLIGHTS
RELATED TOPICS

(CNN) -- NBC learned fairly quickly that Jay Leno at 10 p.m. was not hitting the sweet spot with viewers.

But will several brand new scripted shows do any better? As broadcast networks battle it out for prime-time viewers, the peacock network is rolling the dice by returning to what once made it famous: dramas.

"This new schedule brings NBC back to basics with its commitment to quality scripted programming," said Jeff Gaspin, chairman of NBC Universal Television Entertainment. "Our new shows are distinctive and feature a combination of the biggest talent, the brightest new stars and the strongest auspices in television."

Quality scripted TV and creating stars was what NBC was known for. The 10 p.m. time slot was once hallowed.

It was the home of such beloved shows as "St. Elsewhere" and "E.R." So, it was a huge gamble when the network moved Jay Leno from host of "The Tonight Show" to his own 10 p.m. show.

The decision proved disastrous, with the network very publicly reversing its decision by kicking Conan O'Brien out of "The Tonight Show" host chair and bringing Leno back -- touching off the late-night talk show wars and riling up a nation of "Team CoCo" fans.

It also gave media types a great deal to write and talk about in terms of how the network would plan its rebound.

"Stripping the 10 p.m. hour with a talk show that duplicated a lot of other talk shows that were already on later: not that great," wrote Linda Holmes in NPR's Monkey See column. "Bygones, right?"

The recently announced NBC schedule includes a new franchise of an old standard and drama from an Emmy award-winning executive producer who has brought ratings gold to another network and plenty of excitement to the cinema.

"Chase" will be a freshman drama from Jerry Bruckheimer, whose company is behind the successful CBS "CSI" franchise and the "Pirates of the Caribbean" films. It will occupy the 10 p.m. slot on Mondays.

In what is sure to be viewed by some as a nod to the success of the location-based "CSI" franchise, "Law & Order: Los Angeles" will occupy the 10 p.m. slot on Wednesday nights, even as its namesake leaves the air after almost 20 years.

NBC is bringing back "Parenthood" for a 10 p.m. Tuesday slot and will offer new shows, the romantic anthology "Love Bites" on Thursdays and the Jimmy Smits-starring/O'Brien-produced drama "Outlaw" on Fridays.

Robert Thompson, founding director of the Bleier Center for Television and Popular Culture at Syracuse University, said the new NBC schedule is a case of "when something you try goes really, really badly, follow it up by doing the opposite."

Sure it's different, but will it work for NBC?

"It's not necessarily the most rational thing to do," Thompson said. "I don't know that the failure of Jay Leno demonstrated that people would not watch a five-day-a-week program like that at 10 o'clock. It proved that they would not watch Leno and that that particular show wasn't very good."

But NBC seems to be counting on the new 10 p.m. lineup in addition to new scripted shows like "Undercovers," a spy drama about a married couple, and "The Event," about a man who investigates the mysterious disappearance of his fiancée.

The slew of new comedies and dramas makes sense, strategically: In a nutshell, post-Jay Leno Show, NBC's executives have only one season to prove they can make new hits before getting taken over by Comcast, writes TIME's TV critic James Poniewozik. "So they're throwing everything they can at the wall, whatever the cost, in hopes that something (hopefully several somethings) will break out."

NBC's predicament seems the exact opposite of rival network Fox, which also announced its fall lineup.

Whereas NBC is looking for a do-over and hoping folks strip the Leno debacle from their memory, Fox appears to be playing to its strengths by launching a Tuesday comedy night anchored by its break-out hit "Glee" and expanding the juggernaut "American Idol" from 60 to 90 minutes.

Fox is bringing back its buzz-worthy shows like "Fringe," "Bones" and "Lie to Me," while adding four comedies: the animated "Bob's Burgers," "Mixed Signals," "Raising Hope" and "Running Wilde." It's also adding three dramas: "Lonestar," "Ride-Along" and "Terra Nova."

Thompson said other broadcast networks might soon take a page from Fox in doing away with the 10 p.m. time slot altogether as successful cable series continue to erode the audience numbers with fewer episodes, which also means shows that are produced more cheaply.

"We've seen some of the networks already give some of their time slots back to the affiliates," he said. "Fox doesn't have to program as much as the original three networks because they don't have that [10 p.m.] time slot, and I wouldn't be surprised to see another network follow suit. NBC's first attempt to solve the economies of modern television's problem was the Leno idea and that didn't work."