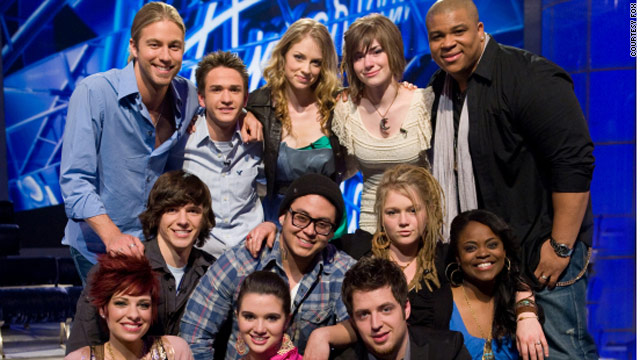 This season's crop of "American Idol" contestants seem to not be resonating as much with viewers as past years.
STORY HIGHLIGHTS

(CNN) -- For years "American Idol" has been known to its competitors by a moniker meant to express its popularity and immense ratings: "The Death Star."

But this year the show is looking more vulnerable. In February, the Winter Olympics ended "Idol's" audience domination when two of its nights of competitive action edged out the talent competition -- the first time "Idol" had lost in six years.

Then, another competition took the title of most-watched show when "Dancing with the Stars" beat "Idol" in the quest for most viewers, not once, but twice in consecutive weeks.

So is "Idol," which has arguably been the most successful show on television in recent years, on the ropes?

"This is just not an exciting season," said Lyndsey Parker, managing editor of Yahoo Music, who blogs about "Idol" in her "Reality Rocks" column. "As with any show it comes down to casting, whether you are casting for [MTV's] 'The Real World' or 'American Idol.' If the people you are casting aren't that interesting, people aren't going to watch."

On April 20, "Idol's" ratings dipped below the 20 million viewers mark.

Bill Gorman of the website TV By The Numbers said that with combined ratings, "Idol" is down about 7 percent this season over last. But he hastens to add that overall many of the networks are down in the ratings, as invariably happens with shows like "Idol," now in its ninth season.

"Is 'American Idol' down? Yes, they are" he said. "Are they down more than the typical show? Absolutely not."

During a recent appearance on CNN's "Larry King Live," "Idol" host Ryan Seacrest said that at this stage in the show "ratings traditionally take a little dip" before "heading back up" later in the season.

"It goes down, it goes up," said show judge Simon Cowell. "How many years have we been doing this? We're doing fine."

Yahoo's Parker said there are other indications that fans may not be thrilled by this season. Over at Yahoo, she said, searches are down for the search term "American Idol" 43 percent this season compared to last season.

Parker said she believes part of the fan malaise can be attributed to the "Adam Lambert effect," where last season's runner-up had fans tuning in whether they loved him or hated him.

But she said she also thinks shows like "Dancing with the Stars" have done a better job of getting people on that viewers want to watch and delivering those "water cooler moments" that get fans buzzing.

"On 'Dancing with the Stars' you had Kate Gosselin, whose name has been on a lot of people's lips, Pamela Anderson who has always had a crazy fan base, and Shannen Doherty," Parker said. "They have a cast that is full of lightning-rod people so of course people would much rather watch Pamela Anderson possibly pop out of her dress than another boring cover of 'A Little Less Conversation.'"

Kirthana Ramisetti, the managing editor of polling site Predicto.com, says her site's audience is much less engaged with "American Idol" this season than in the past.

"Last year early in the season we asked who would be voted out of 'American Idol' and we received about 5,000 votes," Ramisetti said. "When we asked that same question the week 'Idol's' Top 12 began their performances we received less than 1,000 votes."

She said she believes that in addition to the perceived mediocrity of this season's "Idol" contestants, the show is also competing for the attention of a public that is being treated to tabloid stories like Sandra Bullock's and Tiger Woods' marital woes.

'The biggest news story coming out of 'Idol' is not the contestants or the judges, it's Ryan Seacrest being completely strange and outrageous while hosting the show," Ramisetti said. "I think that's a real problem for this show's health if their biggest stories coming out are not about the contestants that people are supposed to be interested in and wanting to vote for."