Countdown to 'Glee' ticks away 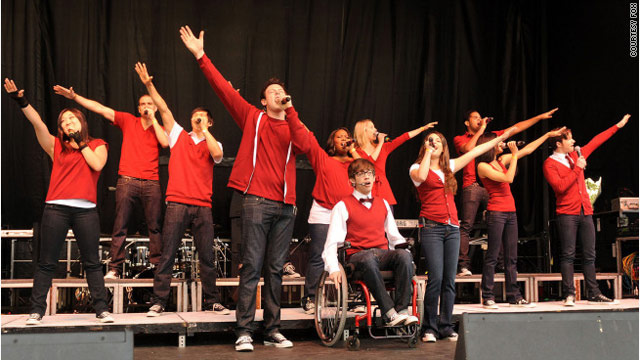 (CNN) -- Right after Tuesday's "American Idol" -- at 9:28 p.m., to be exact -- "Glee's" four-month hiatus will come to an end. At this point, even those who aren't die-hard Gleeks probably knew that already.

Between the Tweeting, the Facebooking, the "Glee" flash mobs, the Fox promos, and the cast popping up everywhere from the White House to the "Oprah Winfrey Show," the return of the network's freshman phenomenon hasn't exactly been kept a secret.

Part of this is smart marketing strategy; it's a challenge to get people to tune in to a show after months of absence no matter what the program is, said Bill Gorman of TVByTheNumbers.com.

While the Fox promotion extravaganza -- a.k.a., "Gleek Week" -- may have bordered on overkill, said Surf Report writer and editor Diane Gordon, "you can't discount that the show has a very passionate fan base." The passion is particularly heady online, said 30-year-old "Glee"-watcher Rachel Kirkham, who runs Gleehab.com.

"If you spend 10 minutes looking up stuff related to 'Glee,' you see an insane Internet following -- it's unbelievable. I was always fascinated by how excited and involved people were in the online community," Kirkham said.

"However [Fox] marketed 'Glee' -- social networking, the commercials, or releasing things like the DVD's at the perfect time -- they just kept that hype going, and the fans would blow it up," she added. "I was still able to post something new on my site every single day for four months -- at least four posts a day, sometimes more," she said. "It was pure genius with Fox. [The network] and everyone involved in the show has been truly appreciative of the Internet fandom."

Fans cite a number of reasons for their undying devotion: the music, the writing and the sense of diversity.

"Glee is such a representation of different people from different walks of life who come together for the love of music and they back each other up," said Bonnie Lewis, 25, of Old Town Orange, California. "It brings out everyone's gifts and talents and then they all come together and they do what they love."

Lewis and her husband started watching "Glee" after the first half of the season had already aired, but caught up on it within a week. To get her "Glee" fix during the hiatus, Lewis downloaded the show's two albums to her iPod and now runs to them four to five times a week.

Since she and her husband love to watch the first nine episodes with friends, Lewis is throwing a party for the show's return, complete with theatrically-themed cupcakes.

"Glee is definitely a TV show that you want to watch with more people; you get a sense of community that way" she said, adding that the "Glee" lovers come in all age groups. Of the 15 to 20 people Lewis is expecting, the youngest is in her early 20s and then a few others are moms with 8-year-olds. To keep the atmosphere festive, Lewis is also throwing in a little pre-"Glee" wine-tasting.

Sandi Graham of Dallas, Texas, said she started watching it with her 23-year-old son, and they both got hooked on the writing -- although Graham notes that Lea Michele, who plays Rachel Berry on the show, is another likely factor for her son's rapt attention span. Almost as soon as the hiatus began, Graham was planning a party for the series' return.

Graham, 45, said she's keeping the party small -- just a handful of people who are truly into "Glee" and won't need a catch-up session to understand where the plot is picking up.

Because the party will host some of her 23-year-old son's friends, this party will feature a "Glee" friendly drinking game. "For example, every time they say 'sectionals', we'd drink sangria slushies," Graham said.

Clearly, Fox already has a lock on the show's current viewers, but Gorman of TVbytheNumbers.com thinks the show's positioning right behind "American Idol" could mean an expanding audience for Fox -- at the least, it will mean sizeable ratings for the first episode back.

"They'll get new people to tune in because it follows 'Idol' rather than because of marketing. Most of the marketing outside of Fox promos -- things like the musical shows, and anything else like the record releases and stuff like that -- reaches existing viewers," Gorman explained.

With "Idol" doing a 7.7 rating in adults ages 18-49 two weeks ago, Gorman said, "Glee" should be able to get at least a 5 rating in the same demographic, "putting it easily at the number 2 spot for the week," he added.

The only possible shadow on "Glee's" big night seems to be ABC's "Lost," now in its final season. It's a schedule snafu serious enough that Kirkham and her husband had to have a discussion about who would get to watch what.

"My husband, as the seasons go on, is a little more into 'Lost' than I am, and that's been a bit of contention in our marriage," Kirkham said. "We had to sit down and figure out how to make this work."