The Tao of 'American Idol' 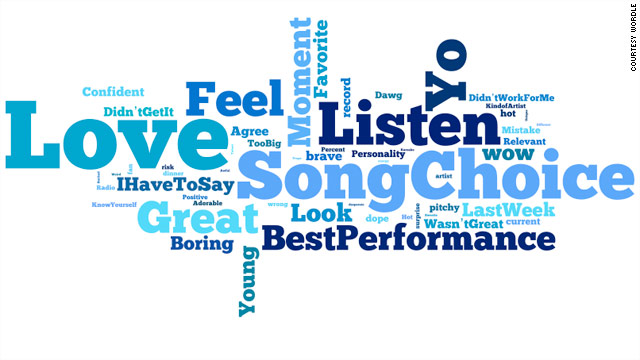 Last week the "American Idol" judges critiqued the contestants and we counted the words and phrases they said the most. Graphic by Jacque Wilson and Rebecca Rolfe/Courtesy Wordle
STORY HIGHLIGHTS
RELATED TOPICS

Join CNN throughout the "American Idol" season as Lisa Respers France blogs live during the performance and result shows at The Marquee Blog.

(CNN) -- While it's the voters ultimately deciding who will win the title of "American Idol" each season, the judges' input can't be ignored.

Whether it's their early anointing of a favorite, like when Simon Cowell predicted that Carrie Underwood would not only snag the Season Four title but also become one of the most successful winners (she did and she has), or when viewers rallying behind an underdog such as last season's winner Kris Allen, America clearly pays attention to the judges' critiques.

But what are the judges really saying when they toss out some of their favorite phrases? Could it possibly be that new judge Ellen DeGeneres really does think every contestant is "amazing" and really does love each one? Is Simon Cowell attempting to play mind-games when he refers to a performance as "indulgent?"

We try and translate some of DeGeneres', Cowell's, Randy Jackson's and Kara DioGuardi's favorite assessments of the performers.

"You didn't do anything different with the song." What he really means is "I am incredibly bored right now. Thank goodness they pay me so much money to sit here and listen to this."

"You are a Broadway singer." What he really means is "At this point, I have absolutely no idea how in the world we would market you if you were to win."

"I didn't love the song, but you sang it very well." What he really means is "That wasn't nearly as bad as I anticipated."

"You have a great radio voice." What she really means is "It wouldn't be the worst thing in the world if you won this competition."

"That was authentic. I felt it" What she really means is "You were able to cover that song without sounding like a bad karaoke rip-off."

"Part of the problem is that you haven't figured out who you want to be as an artist yet" What she really means "You haven't been able to take the extremely confusing critiques we have been giving you and synthesize that into giving us exactly what we want."

"I don't know. That just didn't work for me." What he really means is "That was awful, and I know you can do better than that."

"Dawg listen, the song was a little bit too big for you." What he really means is "You don't have that great of a voice to even go there."

"You are adorable" What she really means is "You might want to start thinking about a career in acting instead of music."

"You have such a great personality!' What she really means is "You are cute, but not as adorable as some of the others so let's focus on some of your better attributes, shall we?"

"You know I am a fan of yours ..." What she really means is "I am about to deliver a comment that should be harsh, but because I am so nice I will completely sugar-coat it."

And while Ryan Seacrest isn't a judge, he's got a bit of code speak in him also.

"Do you agree with what the judges just said?" What he really means is "Give us a juicy, biting quote about the judges, Simon in particular, so I can blow it completely out of proportion."