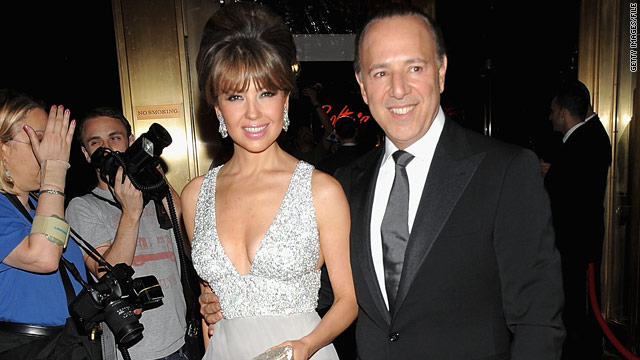 (CNN) -- There's lots of speculation as to who will be replacing Simon Cowell on "American Idol" and who will serve as judges on Cowell's new show "The X Factor."

One name being bandied about is that of Tommy Mottola, former head of Sony Music Entertainment, who is said to be in the process of being courted by both shows as a possible judge.

A source with knowledge of the negotiations said there is "some truth" to reports that Mottola has been pegged to possibly replace the mercurial "Idol" judge. That source said Cowell also is interested in bringing Mottola on board for his new talent show.

"There's a lot of business that Mr. Mottola does with Simon Cowell and lots of businesses that probably will be announced soon," the source said. "Nothing is official yet, and nothing is set."

Mottola is the ex-husband of singer Mariah Carey and well-known in the industry for having an eye and ear for major talent.

It's been widely reported he helped guide the careers of several successful acts including Jennifer Lopez and Destiny's Child. He is currently married to Mexican pop star Thalia.

The news of a possible deal with Mottola comes as buzz continues to build that former "Idol" judge Paula Abdul has met with Cowell to discuss her participation in the show. Abdul and Cowell were known for their playful battles on "Idol," and fans were vocal about their displeasure that Abdul would not be returning for the ninth season.

This season, several celebrities have served as guest judges on "Idol" during the audition round, including singer Katy Perry, who told MTV that she enjoyed the gig that saw her dishing out some harsh criticism and crossing swords with permanent judge Kara DioGuardi.

"If I was offered that job as a permanent host, I would ditch my career and take on that career," Perry said.