The business behind 'Jersey Shore' 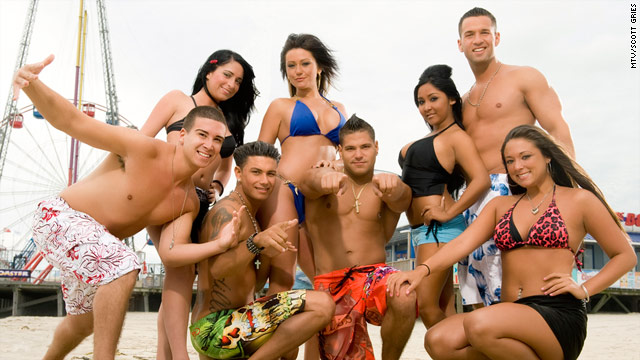 (CNN) -- The self-described "guidos" and "guidettes" of the MTV reality show "Jersey Shore" have gone from unknowns to infamous in less than two months. The former cocktail waiter, computer programmer and receptionist now receive huge appearance fees and enjoy all the trappings of celebrity, including a support staff of agents, managers and publicists.

Since its December 3 premiere, the series about seven twenty-somethings spending the summer in a Seaside Heights, New Jersey, beach house has brought in millions of viewers per episode, making overnight stars of its over-tanned and over-served cast. Two cast members, Mike "The Situation" Sorrentino and Pauly "D" DelVecchio, are in such high demand they were double-booked for events last week.

They were contracted to judge a "Jersey Shore" look-alike contest at Chicago, Illinois, nightclub Lumen the same day they had a major press junket to do in Los Angeles, California, for MTV. The cast members' agent had to contact the club and cancel at the last minute.

The entire cast is under contract with MTV to make appearances on behalf of the show, but they are allowed to book personal appearances and earn some cash on the side as long as it doesn't conflict with MTV's schedule.

McFadden's Saloons, based out of New York, were among the first venues to pick up on just how popular "Jersey Shore" would be and how the cast could be used to drive traffic into the bars. The McFadden's marketing team began negotiating with booking agency Central Entertainment Group after the show's first episode aired.

The audience grew after controversy erupted when cast-member Nicole "Snookie" Polizzi was punched in the face during the taping of an early episode and after New Jersey politicians and Italian-American groups raised protests over the depictions on the show.

New York Daily News television writer Cristina Kinon said the show benefited from people wanting to tune in and see what all the fuss was about. "MTV helped them by running marathons, scheduling the show at all times of the day, having the kids host New Year's Eve and putting them on the cover of every magazine," Kinon said. "You couldn't escape it! The fans eventually drowned out the protesters."

In December, the "Jersey Shore" cast members could be booked for an event for around $2,000 apiece. As their celebrity has grown, the more popular cast members, who include Sorrentino and DelVecchio, command rates of closer to $10,000.

"They just came out of nowhere and they have exploded. People are completely obsessed with them," said Hollywood Life editor-in-chief Bonnie Fuller. "The fact that they were nobodies a couple of months ago and earning nothing and now they are getting flown out to Los Angeles and paid to appear at parties is amazing for them."

DelVecchio and Jenni "JWoww" Farley recently made an appearance at McFadden's Washington location, where DelVecchio got on the microphone and led the crowd in a fist-pumping contest. Other cast-members are scheduled to appear at locations in Boston, Massachusetts, and Nashville, Tennessee.

"It is complete madness when they show up at the bar. You can't imagine it. Very normal looking, preppy people climb the walls just to touch them," said bar manager Chris Fox.

The show often consists of the roommates trolling shore nightclubs and bars, drinking too much, getting into fights and occasionally vomiting on-air.

Because cast-members are quickly turning into celebrities, they are making some celebrity friends. Last week the cast partied at Hollywood nightclub Voyeur with Lindsay Lohan. Lohan later posted pictures of them on her Twitter account.

"Precious" star Gabourey Sidibe said she's a proud viewer of MTV. "There's not a day that goes by -- I don't even watch the show regularly -- but I'm always quoting it," she said.

These kids from "down the shore" are a business-savvy group, having realized early on that they could trade their fame for free or discounted products and services.

Farley shares products she loves on her Jwoww.com Web site, including her diet and plastic surgery tips. But JWoww has taken her entrepreneurship one step further. Farley also sold $49.99 versions of the infamous plunge-front, draped yellow jersey top she wore on her site until demand got so high she couldn't keep up with the orders.

Farley's boyfriend and manager, Tom Lippolis, said she plans to launch a line of clothing in late spring or early summer.

MTV is continuing to capitalize on the show's success, expanding the content online with full episodes on the MTV Web site as well as sneak peeks, photo galleries and "Jersey Shore: After Hours," a video in which cast mates are interviewed about recent episodes.

"Shore" merchandise, including T-shirts that say, "Fist-pumping Like Champs" and "Team Snookie," has been selling from MTV's online merchandising partner Zazzle.com.

"The products are selling extremely well," said Mike Karns, Zazzle's director of consumer marketing. "We have shipped Jersey Shore products to all 50 states with the majority of the products being shipped to New Jersey and New York."

The network has plans to launch a Jersey Shore character creator, for which viewers can choose a hairstyle, clothes and accessories to recreate themselves as a character from the show. The program will debut online and then be offered as an iPhone application.

"It's not enough in this day and age for TV programmers looking to establish hits to simply chase a big rating on TV. With audiences spread across all platforms including computers and wireless devices, a property like 'Jersey Shore' has to have a presence everywhere content can be consumed," said Andrew Wallenstein, Digital Media Editor for The Hollywood Reporter.

It seems to be only the beginning of the "Jersey Shore's" 15 minutes of fame. The show is expected to run for a second season and as long as audiences engage with the cast's regimen of drinking, gym, tanning and laundry, MTV will continue to keep them in the limelight.