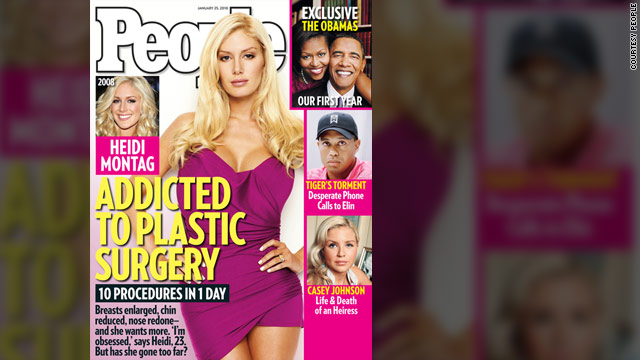 (CNN) -- Fans will be forgiven if they don't recognize Heidi Montag.

The reality star turned aspiring pop singer is the subject of a People cover story about her new plastic surgery "obsession."

Montag revealed to the magazine that she recently underwent 10 hours of cosmetic surgery, including a nose job revision, a mini brow lift, bigger breast implants and buttock augmentation.

"For the past three years I've thought about what to have done," Montag said. "I am absolutely beyond obsessed."

The castmate of MTV's "The Hills" said that when she first moved to Los Angeles as a teen from Colorado she felt "flat and insecure" surrounded by so many women with breast implants. In 2007, she opted for breast augmentation and a nose job.

But those tweaks weren't enough, and accompanied by her husband and fellow reality TV show personality Spencer Pratt, the 23-year-old ventured to the plastic surgeon again.

"I was made fun of when I was younger, and so I had insecurities, especially after I moved to L.A.," Montag said. "People said I had a 'Jay Leno chin;' they'd circle it on blogs and say nasty things."

Now that Montag wants to find fame as a pop singer, her looks are all the more important, she told People.

Check out the story at People.com

"I'm competing against the Britney Spearses of the world -- and when she was in her prime, it was her sex appeal that sold," Montag said. "Obviously, looks matter; it's a superficial industry."

Montag said she was pleased with the results of her surgery but is already planning more, including increasing her breast cup size from the current DDD.

Since first appearing on "The Hills," Montag and Pratt have worked hard to stay in the spotlight. There was speculation their 2008 wedding was a publicity stunt, and the pair appeared on the reality show "I'm a Celebrity ... Get Me out of Here!"

In 2009, she performed her song "Body Language" during the Miss Universe Pageant in the Bahamas.