O'Brien: Moving 'Tonight' for Leno would be 'its destruction' 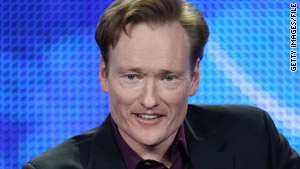 Conan O'Brien says he "cannot participate in what I honestly believe' is the destruction of "The Tonight Show."
STORY HIGHLIGHTS
RELATED TOPICS

(CNN) -- Conan O'Brien suggested in a statement Tuesday that he will not accept NBC's proposal to move him and "The Tonight Show," which he's hosted for seven months, to 12:05 a.m. ET.

NBC has proposed moving "The Tonight Show" from its traditional 11:35 p.m. slot so that the show's former host, Jay Leno, could host a half-hour show then.

"My staff and I have worked unbelievably hard and we are very proud of our contribution to the legacy of 'The Tonight Show.' But I cannot participate in what I honestly believe is its destruction," O'Brien said. "Some people will make the argument that with DVRs and the Internet a time slot doesn't matter. But with the Tonight Show, I believe nothing could matter more.

"There has been speculation about my going to another network but, to set the record straight, I currently have no other offer and honestly have no idea what happens next. My hope is that NBC and I can resolve this quickly so that my staff, crew, and I can do a show we can be proud of, for a company that values our work."

After Leno left "The Tonight Show" last year -- as part of an agreement reached six years ago giving it to O'Brien -- he began hosting "The Jay Leno Show" for NBC in the fall, airing at 10 p.m. ET.

But ratings for the 10 p.m. show were low, and on Sunday, NBC announced that it was taking Leno out of the prime-time slot because the show "didn't meet affiliates' needs" despite performing at acceptable levels for the network. The last show will air February 11 to make way for the 2010 Winter Olympics, which airs starting February 12.

Jeff Gaspin, chairman of NBC Universal Television Entertainment, said the plan was for Leno to host a new, half-hour show at 11:35 p.m. ET, followed by "Tonight" with O'Brien at 12:05 a.m. and Jimmy Fallon's "Late Night" show moving to 1 a.m. As of Sunday, NBC was still negotiating with the three hosts over the proposed lineup.

O'Brien, in his statement Tuesday, said the plan wasn't acceptable.

"For 60 years the 'Tonight Show' has aired immediately following the late local news. I sincerely believe that delaying 'The Tonight Show' into the next day to accommodate another comedy program will seriously damage what I consider to be the greatest franchise in the history of broadcasting," O'Brien said. " 'The Tonight Show' at 12:05 simply isn't 'The Tonight Show.'

"Also, if I accept this move I will be knocking the 'Late Night' show, which I inherited from David Letterman and passed on to Jimmy Fallon, out of its long-held time slot. That would hurt the other NBC franchise that I love, and it would be unfair to Jimmy."

Fox's president of entertainment, Kevin Reilly, told reporters on Monday that his network may be interested in O'Brien should he leave "Tonight."

"I love him," Reilly said at the Television Critics Association press tour in Pasadena, California. "It's a very compatible fit for our brand. He is one of the few guys in the planet who has demonstrated he can do one of these shows every night."

In monologues on their respective shows on Monday, Leno and O'Brien had zingers about the looming shakeup.

"NBC said the show performed exactly as they expected it would and then canceled us. Don't confuse this [with] when we were on at late night and performed better than expected and they canceled us. That was totally different," Leno quipped.

O'Brien had the following to say on his show Monday:

-- "This weekend no one was seriously hurt, but a 6.5 earthquake hit California. The earthquake was so powerful that it knocked Jay Leno's show from 10:00 to 11:35."

-- "On the positive side, I have learned a valuable lesson from all this: Never sign a contract that ends with the word 'NOT.' "