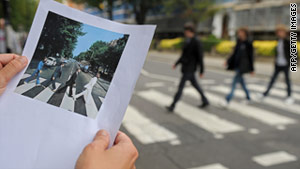 The Beatles made it famous by walking across it on the cover of their "Abbey Road" album.
STORY HIGHLIGHTS
RELATED TOPICS

London (CNN) -- A striped crosswalk in London entered the history books Wednesday for a second time.

First, the Beatles made it famous by walking across it on the cover of their "Abbey Road" album, prompting millions of imitators.

Then, this week, the British government declared the zebra crossing a historic landmark -- the first street crossing ever to get the designation.

"It is a fantastic testimony to the international fame of the Beatles that -- more than 40 years on -- this crossing continues to attract thousands of visitors each year, trying to mimic their iconic 'Abbey Road' album cover," British heritage minister John Penrose said.

The street crossing is near the Abbey Road music studios, where the album was recorded. The studios themselves were declared a historic landmark in February.

Paul McCartney, who appears barefoot on the album cover, said he and the Beatles had had a great year and that the designation of the crosswalk was "icing on the cake."

He and Ringo Starr are the only two living Beatles. John Lennon was shot and killed in 1980, and George Harrison died of cancer in 2001.