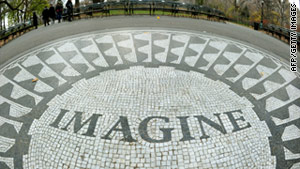 (CNN) -- Like millions around the world, I owe my early career choices to the Beatles.

As a 6-year-old, I stayed up "late" one Sunday night to watch the Fab Four explode onto the world stage on "the Ed Sullivan Show."

There were the Saturday afternoons I walked to the Plaza Theater in downtown Glasgow, Kentucky, to watch "Help!" and "A Hard Day's Night."

I thank Ringo for my love of percussion, which manifested itself via paint brushes and coffee cans until I could get real drums.

Fast forward a number of years, and I was an honest-to-goodness musician, touring the world with a number of recording artists. I had a gold record on the wall.

On the road with jazz-grass fiddle wizard Vassar Clements, we were somewhere in Pennsylvania. We stayed the night there so a TV crew could follow us the next day as we arrived in New York for a series of shows.

The hotel room TV was on "Monday Night Football" when the world changed. Sportscaster Howard Cosell told us that John Lennon had been shot and killed that night in New York.

Our trip to New York took on a different meaning.

It was dreary and rainy and cold the next morning as we drove toward the city. Fitting, really.

After sound check, the road manager and I took the subway up to Columbus Circle and began walking up Central Park West toward the Dakota, the apartment building where John Lennon lived and where he was shot.

As we walked along the sidewalk, it was like someone had thrown a sad, gray, wet blanket on the city. There was traffic on the streets, but the streets were quiet.

There were people talking as they scurried, but the air was mute.

And as we approached the Dakota, we noticed a flock of birds circling above the building. Not venturing anywhere. Just circling. As if they were standing guard, mourning.

Then, from around the corner, we heard the serenade of "Give Peace a Chance" and "Imagine" from the hundreds of fellow fans. Some holding candles. Some holding flowers. All holding memories.

There was so much sadness that day, so many tears, yet it was overshadowed by peace and love and memories. And music.

Thirty years later, the Beatles, and John Lennon, live on. So does the music. So does the legacy. So does the hope -- that someday the world will give peace a chance. Imagine.